Hunter Lawrence on the Forkner drama from SLC4 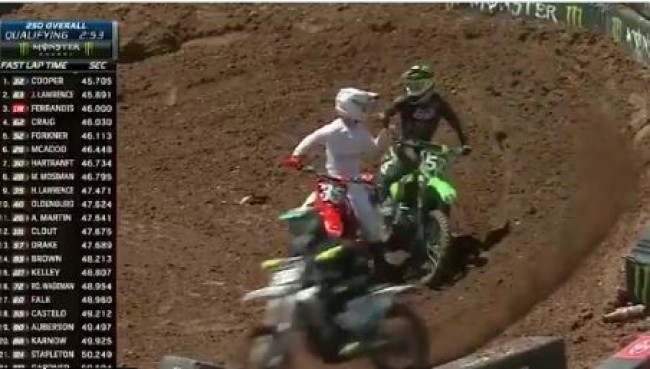 The guys at Gypsy Tales caught up with Hunter Lawrence to get his thoughts on the drama between himself and Austin Forkner during practice at Salt Lake City 4.

“It was a silly thing to do but I didn’t care at the time. I’ve never spoken to the guy, never raced him, actually once on an 85cc at the Bulgarian Junior World Championships, he wouldn’t have remembered racing me it’s that long ago. We did a heated lap and before that you look to try and position yourself over a clean lap. I looked and he was behind me, I rolled the second last corner and he wasn’t like trying to get past me. I wasn’t being a d*ck trying to get in front of him before the heat lap so he started behind me and we’d done the heat lap and at the second last corner he finally caught me a little bit there but not to were he had to slow down”, Lawrence told Gypsy Tales.

The Aussie didn’t even know the American was behind him and says a small mistake on the last corner might have cost Forkner a tenth of a second – but that can happen anyone at any given time.

“The last corner, I think I came out of the corner a little bit off balance and didn’t scrub over the little double. Maybe, maybe I cost him a tenth of a second, barely anything. How many times does a slower rider mess up your heat lap? It happens all the time, it’s part of it. The dude goes over the finish line, does the big head shake, I pulled off out of the main line so I’m not getting in anyone elses way and then he rides up, clicks gears up beside me, hits my front wheel and bars. I was like, “is this guy for real?”, I didn’t hear him, he didn’t panic rev me or nothing the whole lap so I didn’t even know he was there.  I was just like, you’re such an entitled princess – get off your high horse. I wasn’t going to play his little girl moves, whatever”, Lawrence stated.

Lawrence acknowledges everyone makes mistakes and that if Forkner done it in a race, he probably wouldn’t have reacted in the same way but for him to do it in practice, Lawrence wasn’t best pleased at the time and prepared to be pushed around.

“I’m not battling him for the title in Supercross but I’m sure I will be at outdoors, that’s what we are aiming for. It’s just the fact I’m out there trying to get a lap in like every other guy out there and he has to throw his hands up in the air like he does and carries on with such an attitude. Calm down, pfft I don’t even care about it – I don’t want to get pushed around, I’m not looking for trouble and don’t want to the guy that runs it in like that, he cut out from the corner soon than I anticipated so that didn’t help my case. At the end of the day we are all human and make mistakes, we live and learn”, added Lawrence.

With the Supercross season edging towards an end, focus will switch to the great outdoors and with Hunter Lawrence’s experience racing the MX2 World Championship. He shouldn’t be far from the front in the AMA Nationals so we might see more drama between the pair.

You can listen to the full Hunter Lawrence interview below: