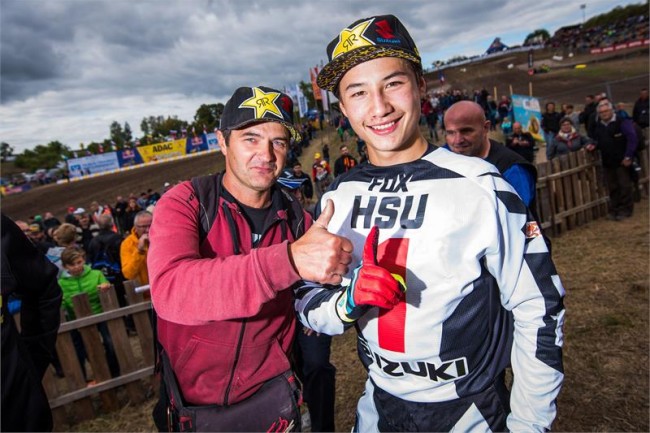 Team Suzuki World MX2 rider Brian Hsu is hoping for a trouble-free recovery period after undergoing surgery two weeks ago on his left hand and wrist and a displacement of the joint that will see the talented teenager face two months on the sidelines.

The former World and European [125cc Junior] Champion made his Grand Prix debut in 2015 and surprised many with his instant speed and acclimatisation to MX2 with a top-10 finish in the first moto of the Lombardian round at Mantova last summer. The 17 year old continued to impress with his supercross technique and capabilities during the autumn, shining at the prestigious Paris-Lille SX with a podium result. Unfortunately a crash while racing at the Motolive event – that coincides with Europe’s largest bike show at EICMA in Milan – last month led to a damaged and dislocated left wrist/ hand.

“Brian was very lucky at Milan on a track that was perhaps too easy and he crashed quite heavily on his left hand,” commented General Manager Stefan Everts. “He’ll now head to Taiwan to see some family over the holiday period and continue his recovery and physio. He’ll then be back in January where he’ll attend school and we hope he can think about riding as soon as he is fully fit and ready. It is important that he doesn’t rush this type of injury and we just want to see him healthy and set for racing.”

Hsu had not been set to make his first outing in 2016 as a full-fledged member of the MX2 set-up until round four (now round three in Holland after the recent cancellation of the Grand Prix of Malaysia) and this timetable could still be realistic.

Team-mate Jeremy Seewer has also been in a recuperation process. The Swiss, who finished fifth in the MX2 series in 2015 on the works RM-Z250 – his first full term as a Pro – needed an operation to repair part of the bone structure in his mouth and to replace several teeth that were the legacy of a practice crash earlier in the year. “I had the problem with my mouth and had been using some fake teeth for quite a while,” the 21 year old explained. “So I had been waiting until the off-season to have the operation and it meant 10 days of not doing much but the problem is almost fixed.

“We have been pushing really hard on the racebike for next year and Stefan has been very strong with the work we wanted to do on the engine. I’m sure we’ll see improvements for next season,” said Seewer, who reached the Grand Prix podium on two occasions in 2015 and is tipped for more silverware for the forthcoming 18-round series that starts at Losail, Qatar for the fourth year in a row on February 27th.