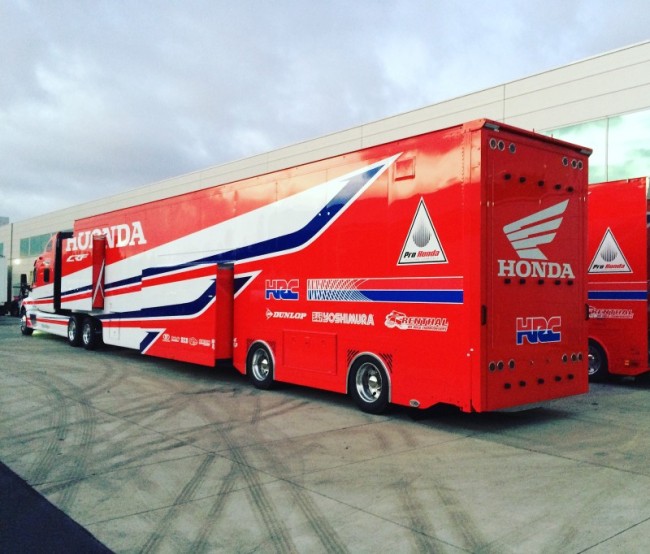 After months of preparation and anticipation, the 2016 AMA Supercross season is set to kick off Saturday at Anaheim, California’s Angel Stadium, where Team Honda HRC riders Trey Canard and Cole Seely yesterday participated in photo shoots and a pre-event press conference.

Media Days typically afford attending riders the opportunity to try out the track, but because of the rains that have pelted Southern California this week, officials opted to keep the stadium floor covered with plastic tarps. The riders are now scheduled to ride the course for the first time during Saturday’s daytime practice and qualifying program. Due to the El Niño weather pattern, precipitation could play in the storylines of several of the Golden State’s supercross rounds this year.

Just as the riders have had to train, test and practice during the preseason, Team Honda HRC staff members have been working hard during the lead-in to the long series. In addition to the normal work dialing in the CRF450R race machines, they’ve had to prepare a new semi trailer that—from design to build—has been almost a year in the making.

Following the activities at Angel Stadium, Canard and Seely made the 25-mile drive west to Carson, where they took part in a Supercross Season Kickoff Party at SoCal Honda Powersports with GEICO Honda riders Justin Bogle, Christian Craig, Jordon Smith and Jimmy Decotis.

In case you missed it, hereis the 2016 Team Honda HRC video.

Trey Canard 41
“I spent a lot of time at home this year, and that was really good for me, just to relax and be with my family. I feel like I’ve done everything I need to in terms of preparation. Tensions are always high for Anaheim 1, so you just need to minimize mistakes and avoid throwing it all away in one race; just coming out of it with good points is really important. I’ve ridden in the wet a lot this winter in Oklahoma, so that could be good if the track is muddy. We’ll do the best we can no matter what the situation is.”

Cole Seely 14
“The preseason has been good. When I first returned from my injury, it felt like everything was happening really fast and we didn’t really have a lot of time on our hands, but things have slowed down a lot during the past two weeks. I think that’s just because having a general feeling of being prepared calms down the hype, which is good. I feel like the team and I are both in a good spot. As far as the weather goes, I think the track will be okay, because the guys who work on it really know what they’re doing. If it ends up being a mud race, the best approach is to just have fun. There’s so much hype around Anaheim 1, but it’s about 17 races, not one. You just need to get out of here healthy and in a good position.”

Dan Betley
Team Manager
“I couldn’t be happier with where the bikes and riders are; both Cole and Trey are really on-point—definitely podium material. Organizing everything else has been a bit stressful, as we only had three days to load the trailer after receiving it from the paint shop. There were some late nights, but the team pulled together really well and we’re 100-percent ready to go, excited to get the season started. Everyone’s goal is to be top-five on starts and get podium finishes, every weekend. If we can do that, then we should be in contention toward the end. As far as the weather goes, if it gets sloppy, the riders have to be smart and not make mistakes—stay out of trouble and be consistent. You win championships on your worst days.”