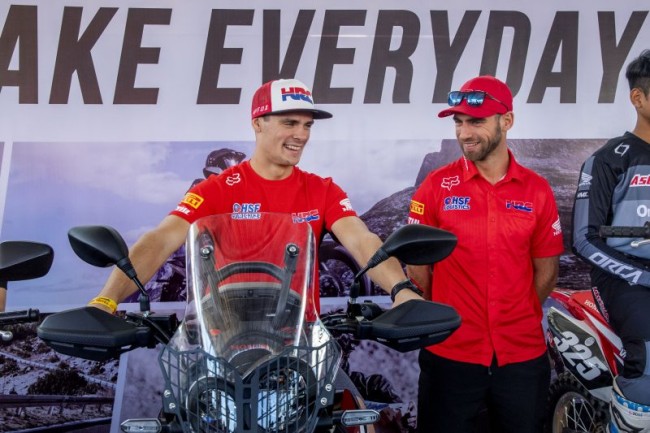 As the motocross world championship enters its final third of the season, all three members of Team HRC are looking forward to a return to Europe after the back-to-back rounds in Indonesia. For Tim Gajser, that means attempting to increase his record breaking win streak to eight overalls in a row, when the gate drops at the hillside track in Loket, Czech Republic, while fellow Honda CRF450RW rider Brian Bogers will once again taking aim at the top 10 in the competitive MXGP class. In the MX2 class, Calvin Vlaanderen had a promising return to action, getting his first podium of the season in Semarang at the last round and he’ll be hoping to keep that momentum at a track that he has performed well at in the past.

After his victory at round 12 at the MXGP of Asia, Gajser broke the Honda world motocross championship win-streak record for a single rider and more importantly for the Slovenian, took another massive step towards a potential third world title and his second championship in the 450 class. The #243 plated Honda CRF450RW now leads the MXGP table by 173 points over second place, with just 300 points still to play for and he’ll be looking to maintain or even extend this gap at the hard-pack Loket facility. Having led every lap at Semarang, and having won 12 of the last 14 motos, confidence is extremely high within the camp and with a weekend off to recharge the batteries, Gajser should be able to come out swinging when the gate drops this coming Sunday for what should be another weekend of hot temperatures.

Teammate Bogers will be hoping a solid Dutch championship performance at the weekend, will give him the boost he needs to place himself in the top 10 in the Czech Republic. With some time at home to recuperate and with an easier journey to the western province of Karlovy Vary, Bogers is looking to improve upon what has been a fairly consistent run of results, these past few rounds.

After a solid seventh overall (including a fourth place moto result) in the Palembang GP, Vlaanderen scored his first podium of the season in Semarang with five-three race results. It was an impressive return to action after missing the previous five rounds and it is something that the Honda CRF250RW rider will be keen to build upon in Loket. In 2018, Vlaanderen won a moto on his way to second overall so he knows he can perform well there and with two more good motos at the Dutch championship under his belt, he’ll head to the Czech Republic hoping to find himself on the podium once again.

Tim Gajser 243
The travel back from Indonesia was okay, I had a little bit of jet lag for the first couple of days but everything went back to normal pretty quickly and I went right back to training. It was definitely nice to have a weekend off from the races though. I spent it at home just relaxing a bit, but at the same time I am very much looking forward to race in Loket. It is a nice track and it always has a good atmosphere with a lot of fans coming from Slovenia so I’m really excited for it and hopefully I can have some good races.

Brian Bogers 189
It has been nice to be able to train at home these past couple of weeks, and even race a Dutch championship round. The overall experience of Indonesia was good, but I wasn’t happy with my results in Semarang so it was a good chance to try and work on somethings and just get comfortable racing again without so much pressure. Now though, it is Loket and it is a hilly hard-pack track which isn’t something we have so much of in Holland but I do enjoy the layout and I am looking forward to racing there because it is a very old school track and it has a really good crowd there.

Calvin Vlaanderen 10
I took a few days rest after Indonesia, just to get used to the time zone change and because it was a tough trip for me after coming back from injury. This weekend I chose to race the Dutch championship though because I believe racing is the best way for me to get back up to speed and it ended up going quite well. I came second overall which was nice, kept it smooth and steady and had a decent pace. Then this week I’ve had a few days testing with the team which has been productive and it’s helped me get ready for Loket. I really enjoy racing there and it’s one of my favourite venues on the calendar, so it should be a good event and I want to make sure to have two strong motos.

Marcus Pereira de Freitas
HRC General Manager – MXGP
It was nice to have a weekend off from the MXGPs, just so everyone could get over the travel and just chose what they wanted to do this past weekend. Tim decided it would be best for him to relax at home, while Brian and Calvin both raced in the Dutch championship. We fully support all their decisions because we know that each rider is different and that they are in different stages of their season. Obviously Tim is on a really impressive run of form and is concentrating on the MXGP races, while the other pair need gate drops just to find improvements and get their race pace. With six rounds to go, we are in the final third of the season, but there is still a lot of racing ahead of us so we continue to keep pushing and making sure the riders are in the best possible position to get maximum results.