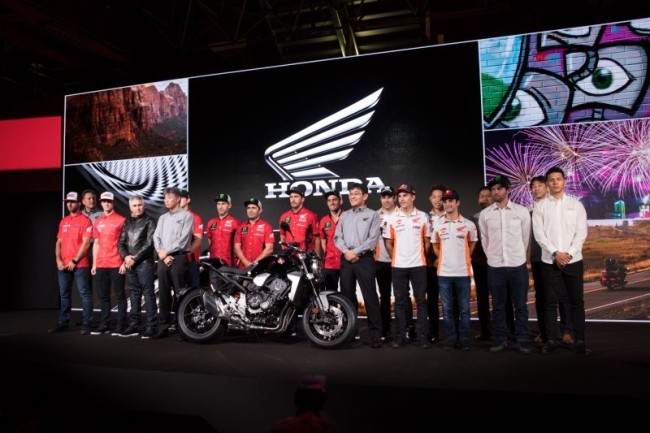 On the eve of the annual EICMA Motorcycle Exhibition in Milan, Italy, Team HRC announced its rider line-up for the 2018 FIM Motocross World Championship, MXGP, as part of its traditional factory motorsport announcement.

Tim Gajser, 2016 MXGP World Champion, remains with Team HRC aboard the #243 Honda CRF450RW, and is joined in the MXGP category by Brian Bogers as the 21-year-old Dutchman joins the factory outfit from the HSF Motorsport team.

The third machine under the Team HRC awning will be Calvin Vlaanderen who will line up behind the MX2 gate on the Honda CRF250RW. The 21-year-old South African joins Honda, like teammate Bogers, from the HSF Motorsport team as part of the sponsorship deal with Team HRC and HSF Logistics, effective from the 2018 season onwards.

The three motocross riders were joined on stage by their counterparts in HRC’s factory MotoGP, Trial, and Dakar / Rally teams, bringing together a world-beating wealth of talent on two wheels.

Team HRC are testing throughout the off-season in preparation for the opening round of the 2018 MXGP series in Argentina on 3-4 March, where Tim Gajser has dominated for the last two years.

Marcus Pereira de Freitas
Team HRC – MXGP
“We’re very excited to announce our new team for 2018. Tim needs no introduction as two-time World Champion with HRC, and we welcome two promising young talents in Brian and Calvin. We have already announced the partnership with HSF for next season, but now we can see what this refreshed team will look like – with two CRF450RWs we will mount another strong challenge to see the World Champion crown return to Honda, and with a CRF250RW entry for Calvin, based on the all-new 2018 Honda CRF250R, we are supporting and developing future talent. Our testing programme with all three riders starts from now to make sure we’re ready to start 2018 on top in Argentina in March.”

Tim Gajser  243
“It’s great to stay with HRC into 2018 for another – we’ve already been a long time on this journey together and I’m so happy to continue. For 2018 I have new teammates which is something new to me – we are all young guys in the team and I think that’s going to be good as we’re all hungry for the challenge together. I’m really excited for the year ahead; we’re fit and ready to go again. It’s a pleasure too to be at EICMA with the rest of the family – the MotoGP guys, Dakar and the Trial team. It’s a really strong family to be part of!”

Brian Bogers  189
“It’s like a dream come true for me to be part of the HRC family. Every time I walk through the paddock it’s not possible to miss Honda and the setup they have, and I’ve always thought about the chance to join this family, and now I’m also part of it. I’m so excited to get on the bike – it looks amazing and when you see how Tim is riding it I can’t wait to get 2018 started. I’ve already been in the same team as Tim, in 2009, so it’s cool to be joining him again for next season, along with Calvin. It’s amazing being here in EICMA with the rest of the HRC riders too, with Marc and Dani, Trial and Dakar, and to know that I’m now a part of that now is really an honour.”

Calvin Vlaanderen  10
“it’s unbelievable to be standing here today with all the other HRC guys being part of the factory team. I’ve always wanted to be part of a factory team since I was a kid, and now that the dream has come true it’s incredible. I spend time watching the likes of Marc and Dani on TV, so to be joining them at EICMA to be announced as a factory rider is a blessing. I’m so excited to get on the new bike – I’ve seen pictures and heard things from different people and apparently it’s unbelievable, so I’m so excited. I couldn’t sleep last night looking forward to today’s announcement and starting to test tomorrow!”