Hotshot Prado stays with KTM until 2020! 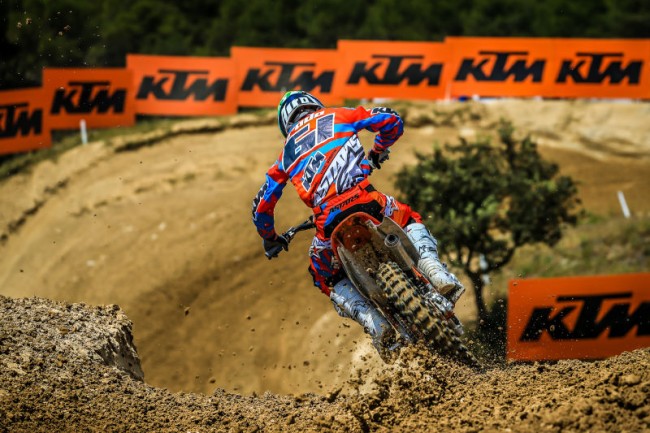 KTM Factory Racing has announced that they have reached agreement with the talented young Spanish rider Jorge Prado to ride for the Factory team until 2020. Prado, who first rode a motorcycle at aged three and is now 14, was World and European 65 cc Champion in 2011, which placed him firmly on the KTM radar screen of future talent. Riding for KTM he continued to perform well in the junior classes and went on the seal the 85 cc European Championship title last season.

Prado is currently contesting the EMX 125 where at the time of writing he was third in the championship standings, 12 points off the leader and four points behind his KTM Factory Junior teammate Josiah Natzke in second place. For next year he will still be part of the KTM Junior program, but as he develops incredibly quickly, the step into the MX2 Factory team seems to be not too far away.

KTM Motorsports Director Pit Beirer: “We aim for excellence not just in the current season but in the long-term, so the nurturing of riders of the caliber of Jorge Prado is an essential part of our planning. We have known for some time that he is an outstanding rider for his age and we are very happy that we can work together to build on the next steps of his career.”

Jorge Prado: “For me KTM is the best bike and the best team in the world and I’m proud to be part of this family. For a young rider like me the trust and confidence that KTM has given me was very important to get to this point in my career. Now it is a very special motivation to continue chasing my goals. I get a lot of support from my team and this is what I need to face my future goals. With this extra motivation I’m now completely focused on my next challenges in the World and European 125 cc Championships.” Prado is also a Red Bull athlete.