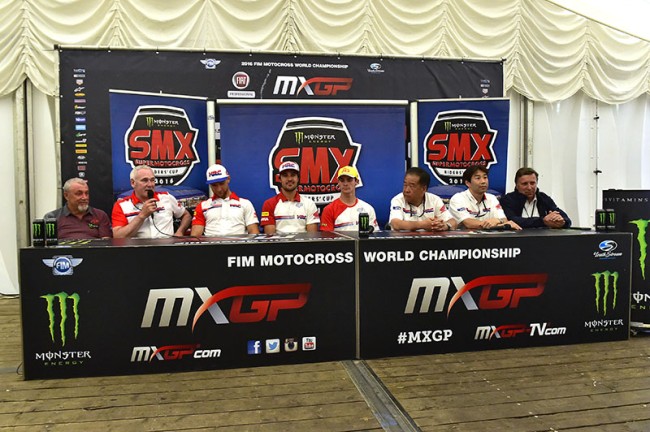 Following the Qualifying Race press conference here in Lommel at the Fiat Professional MXGP of Belgium, Honda have announced their team for the Monster Energy SMX Riders’ and Manufacturers’ Cup, the first ever stadium motocross race, which will take place at the VELTINS-Arena in Gelsenkirchen, Germany, on October 8th.

HRC representatives Mr. Tetsuhiro Kuwata and Mr. Shuhei Nakamoto and HRC’s General Manager Mr. Roger Harvey joined Youthstream President Mr. Giuseppe Luongo and FIM Europe President Dr. Wolfgang Srb on stage, where Mr. Harvey in introduced the team, “The team needs no introduction,” he laughed, “Tim Gajser, the kid leading the MXGP world championship, Gautier Paulin and Evgeny Bobryshev will be our official team. I’m really looking forward to it, I think it will be a very good event, a very popular event, and Honda are looking forward to backing it up.”

Mr. Giuseppe Luongo said, “I would like to thank HRC and Honda for confirming their attendance. They took their time to make their decision to attend this event, they were the last to confirm their attendance, but are the first to announce their team. It’s exciting to have them confirmed because it’s Honda, one of the biggest manufacturers in the world and when they decide to do something, they go big.

Everything is looking good at the VELTINS-Arena, it is sure to be a fantastic show.”

Dr. Wolfgang Srb concluded the presentation, “Thanks to Honda for being the first to announce their team.” He said, “it’s also an honor to have the HRC representatives all the way from Japan here with us. I think this event will be the start of something very big, so thanks to everyone involved.”