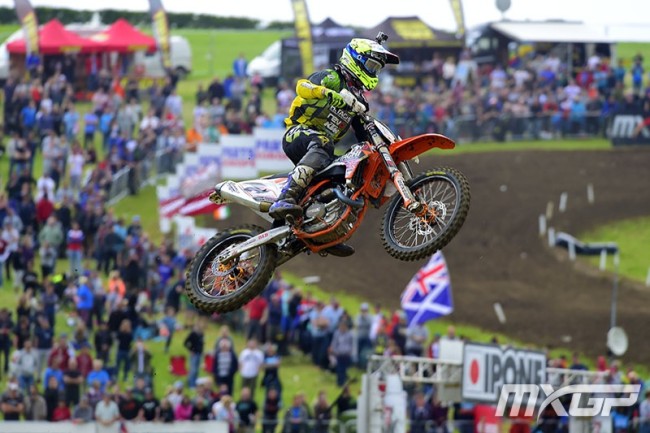 Hitachi Construction Machinery Revo KTM’s Shaun Simpson scored sixth place overall at his home event, the 2015 British Grand Prix at Matterley Basin, but more importantly enjoyed some rousing support from a vibrant 35,000 crowd in southern England as he ran with the leaders in both races for what was the seventh test of eighteen in the 2015 MXGP FIM World Championship.

Matterley was immaculate and prepared for a full race programme of six classes and with a relatively dry spell of weather in the build-up did not carve into the usual array of lines and ruts seen in previous editions of the Grand Prix at the Winchester site. The terrain was particularly rough in several sections by the time of the second MXGP moto on Sunday afternoon (and some light rainfall) but the layout was generally quick with the trademark long jumps another prominent feature.

Simpson ran to a promising sixth position in the Qualification Heat on Saturday and was obviously basking in his role as British Champion and being undefeated on UK soil this year thanks to his exemplary record of success on the 2015 450SX-F in the national series. The Scot made a slight hash of his start in the first moto and had to pull off some shrewd moves to find his way to seventh at mid-race distance when the red-flags came out to allow the fallen Davide Guarneri to receive trackside medical treatment. A full re-run was declared and Shaun made a better job of the next gatedrop and flew into second place behind Cairoli. He withheld the assault of Clement Desalle and Max Nagl for long periods before finding enough rhythm after a ‘1.5’ moto distance to classify fifth behind Evgeny Bobryshev.

The second moto start was even better. A perfect holeshot to front the pack, send the crowd bananas and set the pace for four laps. Shaun found his flow and battled hard again. He rode to sixth place this time and his combined score – 31 being his joint highest this season – meant sixth overall and seventh place in the MXGP World Championship standings.

Over in MX2 and Ben Watson endured some technical trouble, which meant that the 250SX-F did not fire for the Qualification Heat and left him last in the gate for the motos on Sunday. Another glitch, this time with the fuel pipe, required a stop in the pits during the first race and Ben rejoined the fray but out of contention for points. A difficult start in the second moto at least saw the seventeen year old able to settle into the sprint without any problems and he rode well and consistently to finish sixteenth and with five points to show for his efforts.

The fourth round of the EMX250 European Championship – the feeder series to MX2 – saw two of HCMRK’s athletes in competition but it was a difficult day for both James Cottrell and James Dunn with neither racer able to squeeze any points from the meeting.

Hitachi Construction Machinery Revo KTM have a few days to re-stock and prep for round eight of the 2015 MXGP schedule. Villars sout Ecot will host the Grand Prix of France this coming weekend.

Shaun Simpson:
“Great weekend. It is always nice to put on a show for your home crowd and I felt like this was a special one already from Saturday with some new kit for the occasion; the look good-feel good factor. The track wasn’t especially to my liking. It was really fast and not nearly as technical as it has been in the past. I knuckled down. I fluked a good start in the ‘second’ moto – the restart – because someone next to me went early and so did I and the gate dropped just as we both moved. I ran in second and dropped back to fifth while holding Paulin off. In the second one I finally nailed a good start! My second holeshot of the year. I was pumped on riding out front. I led four laps I think and the crowd was getting behind me. I gave myself a massive ‘whoo-hoo’ as I went down one of the big step-downs on the first lap. I just enjoyed it. I was a little bit off with my speed-fitness at the end but I think the restart got a few riders today. I held off Gautier [Paulin] again. So overall sixth and I was looking for two top sixes here and I met my goals. I’m real happy and thrilled to put on a show for the public. I’m looking forward to France now which should be a new track for most of us.”

Ben Watson:
“The whole weekend was difficult up until that last race. We had too many problems. It started well and I was sixteenth in the first session and liked the bike. For the Qualification Heat I was on the line waiting for the Fifteen Second board and the engine cut out with something happening to the ECU. So I was last on the gate for the motos and didn’t have a great start in the first one. I tried to push through but then the fuel pipe came open and the bike stopped again. I managed to pull into the pits to get it sorted but by the time I was out I couldn’t get into the points. I had a terrible start in the second race; I think I was actually last. I pushed through as hard as I could and I felt like I was riding really well. Sixteenth and a few more points and I just hope I can have a bit of luck soon.”