Herlings: The plan is to try and shine in Assen 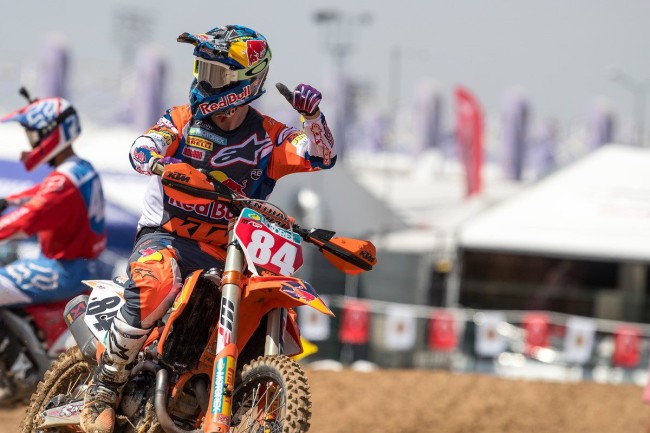 Jeffrey Herlings was at the MXGP of Belgium in Lommel but only as a spectator as he’s currently out injured after breaking his ankle in Latvia.

The factory KTM rider spoke to the media and offered an update on his injured ankle – he’s hoping to be back on the bike soon!

“I definitely wasn’t 100% going into Latvia. We just had like three or four weeks back on the bike. Russia wasn’t too bad for the first race back to be fourth. In Latvia I think I could have won, we won the first moto on Sunday,” Herlings commented.

“I had a crash on the sighting lap, the crash actually wasn’t too bad but when I stood up, another rider drove over my foot/ankle which I already broke at the beginning of the season. I broke my ankle but I still attempted to race, I was going from hell and back during the 35 minutes. Already after the race I knew, I said in the post race interview that I think I’ve broke my ankle. The scan that we did straight after the moto, we noticed it was broken so we had another holiday we really didn’t want to have. Now we are back walking and during that injury, my foot could heal up a little bit more. Now we will slowly get back into training. I will try to ride the bike next week and work my way back up”, added Herlings.

There’s still no plans about when his return to racing will be. It’ll be decided after he’s had some time on the bike but Herlings is motivated to come back for the Motocross Des Nations which takes place at Assen in September.

“The Motocross Des Nations is the only positive thing left that I can make out of 2019. We’ve went to hell and back this year with so much bad luck. I feel really bad for the team, they put so much energy into and and made it really perfect. I couldn’t deliver any results this year but the team have been supporting me so I really want to thank them for being with me during the bad times too. I am looking forward to starting to ride the bike, we don’t really have a plan yet for when we will be back to racing. When me and the team think I’ll be ready then we will start racing again but the plan is to try and shine in Assen – that’s out target for now”, said Herlings.

Herlings has never went 1-1 at the Motocross Des Nations before but could this be the year he can do it? The Netherlands will be heavy favourites for the event with Herlings, Coldenhoff and either Vlaanderen/Van de Moosdijk in the MX2 class but they’ll have to handle the pressure.