Herlings talks about his win in Switzerland 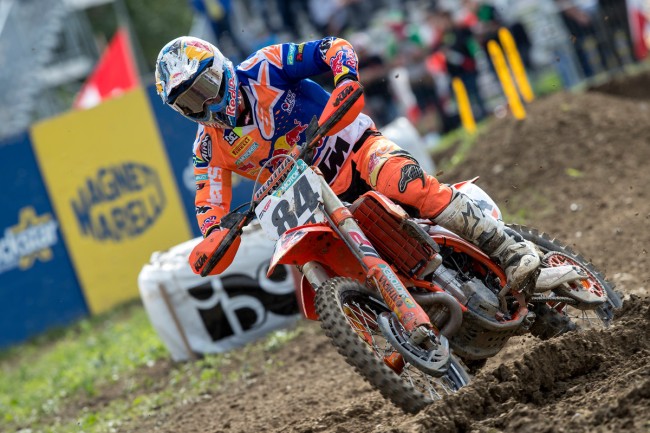 Heavy rainfall in the days preceding the Grand Prix helped soak and soften the impressive circuit a 40km distance from the city of Zurich. Thankfully the climate improved for the race weekend and the watering was beneficial for the racing surface; helping create a choppy terrain that again made high demands of the riders’ technical skill.

Cairoli raced to his sixth Pole Position of 2017 on Saturday while Jeffrey Herlings was one of few riders in the top ten to make progress through the order across the tight layout. With the Dutchman ruing a small crash and taking sixth position and Glenn Coldenhoff in fifth all three factory bikes were well-placed for the gate.

On a bright and sunny raceday the first moto saw Arnaud Tonus, Max Anstie and Gautier Paulin marked the pace from the first corner. The KTM triplet was distributed around the top ten with Cairoli nestled in fifth. The Sicilian found some new lines and more effective flow in the final ten minutes of the moto to move up to third and was close to Anstie and Tonus but unable to dislodge the MXGP rookies. Jeffrey Herlings was riding hard and spent the entire moto with world champion Tim Gajser on his rear wheel. The Belgian GP winner was at the front of the second group and sealed sixth place. Glenn Coldenhoff was also part of that tussle until a late race tumble and the Dutchman picked up the KTM to gain fifteenth.

Starts were obviously key and Cairoli launched brightly in the second moto but, by his own admission, was ‘sleeping’ at the start of the thirty-minute and two lap distance and left his rally too late to move higher than fourth. His 3-4 scorecard was sufficient for his eleventh podium of the term. Escaping free at the front was Herlings. The former three-times MX2 World Champion overtook Paulin and rode at his own speed to bank an eighth moto victory in his maiden MXGP season. The 25 points elevated Herlings to the top step for the second time in a week. Coldenhoff didn’t exit the gate among the leaders and threaded his way to ninth for thirteenth overall.

Cairoli and Herlings are still first and second in the MXGP standings with 97 points splitting the KTM pair, just 200 remain. Glenn sits tied for tenth spot.

Herlings: “Everything fell into place for me this time. I’ve had GPs when I’ve been 1-2 and still lost out but this time I went 6-1 and had the overall; I’m really happy with that. The track was awesome if you had a good start. If you didn’t then it was a nightmare and so tough to pass with all that roost. I enjoyed the second moto though with the crowd noise! There is still one guy in front of me in the championship so I will continue to look ahead. I know the championship is kinda over unless something happens to Tony and we all hope that doesn’t happen; if I can get second this year then it is still a good thing.”

Cairoli: “For the championship this was good but I’m not happy about the GP; everybody was all-in to win and I rode a little bit too carefully in the beginning of the second moto and made a few big mistakes that cost me a lot of time. The win was possible and I needed to be more aggressive; I slept a bit too much! Anyway it is always good to finish on the podium and the title is coming closer and closer and this is what we are working for. Sweden is another good track that we missed last year and we’ll look to the podium again.”

Coldenhoff: “Yesterday was pretty good: I started well and finished fifth, and if you get the start on this track then you have an advantage. In both motos I struggled with the gate and I don’t know why; I just kinda jumped over it. The first moto was going well and I was in sixth at one point. I made a small mistake and because everyone was so close behind me I think I lost six or seven positions, which was quite bad because I put in a lot of effort to pass some guys. In the second race I had to come from the back and ninth was all I could get. So I’m disappointed, definitely not happy. I know when the starts are right I can be up there so looking forward to next week already.”

Fresh after the excellent ‘1-2’ posted by Jorge Prado and Pauls Jonass last week in Belgium the Red Bull KTM Factory Racing MX2 crew came up against Jeremy Seewer and a vocal home crowd pushed the Swiss to victory in the first moto, and a rapid Benoit Paturel to overall spoils. Jonass played a smart game and although the first MX2 race saw three KTMs setting the pace at the front with Prado enjoying his customary holeshot and spell as race leader, the Latvian rallied from fourth spot to ensure another top three moto classification behind Seewer and Paturel. Prado kept close to his teammate for fourth.

Prado, so effective in the sand for his second win of a rookie season and what was a major confidence booster at Lommel, again continued his education on what was his first visit to Frauenfeld. The teenager’s starting prowess is so fierce and the Spaniard was again a rocket away from the line in the second moto. Jonas was close but briefly lost two positions after a crash. The KTMs were again third and fourth by the cheqeuered flag. Jonass gratefully received a thirteenth podium result from fifteen and lost just one point to Seewer: the gap now 49. Prado was pleased with another top five classification – fifth overall – and is seventh in the MX2 competition in his first year.

Jonass: “We were a little off the pace today but we lost only one point for the championship, which is pretty good. We made the podium today and the most important thing is to stay consistent. I had a crash in the second moto which was a bit disappointing but to come back to 3-3 for third overall was good enough. Jeremy and Benoit were really fast this weekend and I didn’t want to push over my limit. I tried a bit too hard at one point in that second moto and then told myself to stay calm.”

Prado: “I think it was a really good weekend. I made two great starts and concentrated on this more after making a mess of it on Saturday. I was comfortable in the lead in the first moto but then lost my rhythm a bit and the three guys came past me. By the end I had recovered and stayed close to Pauls. I crashed in the second moto and it dropped me to third and again I was looking for a rhythm. I kept my distance from Pauls but picked up the pace in the last laps and didn’t let go. So, pretty good, and we are improving on all types of terrain.”

The third Grand Prix in a row will take place on the stony hard-pack of Uddevalla next weekend and the first visit to Sweden since 2015.