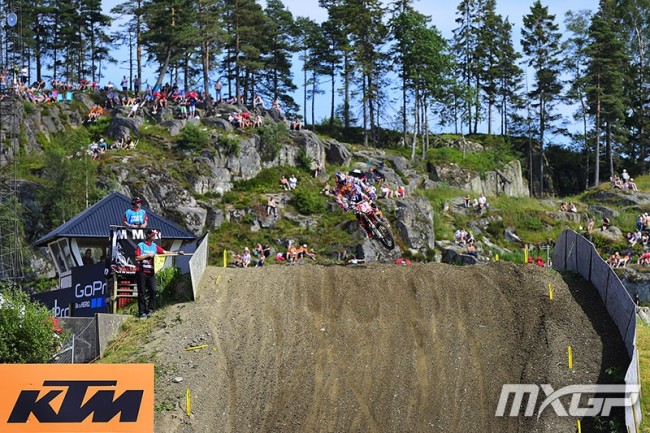 Jeffrey Herlings has injured himself for the second GP in a row!

The Dutchman remarkably won race one in Sweden with freshly plated right collarbone before he high-sided in the first turn in race two trying to get the holeshot.

The Dutchman fortunately landed on his left shoulder (not the recently plated collarbone) but still suffered injury after getting his hand caught under the bars. His fingers were cut to the bone and after getting up and back on the bike initially it was a case of Deja-Vu as Herlings then left the pain in his hand and went straight to pits.

It is unclear if Herlings has broken his fingers and again it will be a waiting game to see if the championship leader will be able to ride in Latvia next weekend. Either way Herlings is making extremely hard work of this championship and is riding through the pain barrier to win it.

A nasty finger injury for Herlings!

His closest rival in the championship Tim Gajser won race two to go with his second in race one, giving the Slovenian his third GP win a row! He has as many GP wins as Herlings this season (4) and is now 78 points behind Herlings with Swiss speedster Guillod second overall in Sweden and now 88 behind the injured Dutchman in third place in the standings.

If Herlings can’t ride in Latvia the championship could be wide open again.