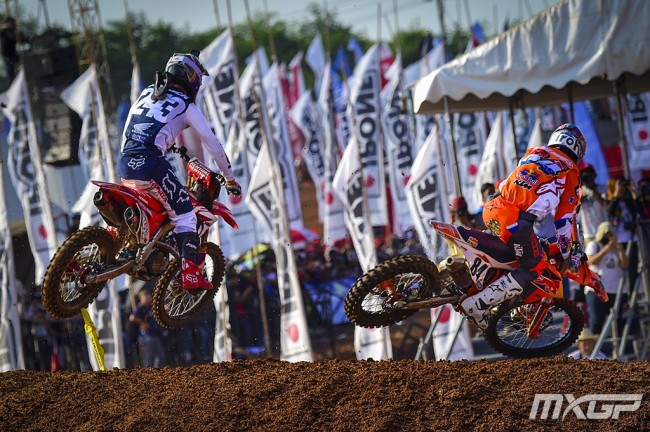 It was another good weekend for Jeffrey Herlings as he went 1-1 to take maximum points at round thirteen of the MXGP World Championship. The Dutch rider broke his collarbone around three weeks ago but you really wouldn’t think it with his riding. In the first moto Herlings got passed by Gajser, Febvre and Paulin and was sitting in fifth at the end of the first lap.

However, Herlings took his time to work through the riders in front of him and ended up passing Gajser for the win with around four laps to go. It was nice to see Tim Gajser right at the front again as he looked to really gel well with the track.

Antonio Cairoli was dealing with a hand injury from the week before but rode well under the circumstances to finish third in moto one.

In the second moto, Jeffrey Herlings led every lap and despite coming under some pressure from Clement Desalle still did enough to win. Again, Gasjer was strong to come home in third and ended up second overall.

Desalle hasn’t been on the podium since winning in Russia but he’ll be happy with his third overall in Semarang.

Antonio Cairoli just missed out on the podium after finishing fourth in the second moto – he lost 12 points in the championship chase which means Herlings opens up his advantage to 24 points now as the series heads to Loket in two weeks time.

It was a disastrous weekend for Romain Febvre who looked to have fourth in the bag in the first moto but then took a big crash with a few laps to go. In the second moto, he crashed around the first corner and then got ran over but he stayed out there to come back to twelfth.

Tommy Searle had a superb GP on his Dixon Kawasaki to end up fifth overall, that’s more like it from the Brit!