Herlings fought for his own and MXGP’s respect in America – and finally got it! 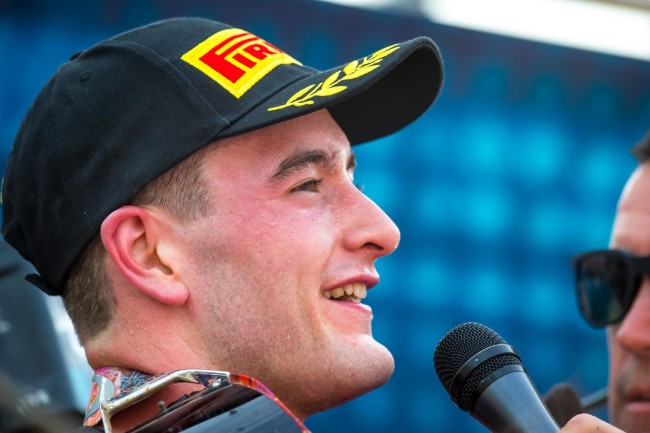 Jeffrey Herlings is a three-time world champion that has has won 64 GPs.

The first overall GP victory came at just 15 years old, seven years ago (1-1 in Valkenswaard against Roczen and Musquin), he also rode with a not fully-healed femur to try and salvage the 2014 world title, lapped an entire field at Leirop and has beaten among others; Ryan Villopoto, Ryan Dungey, Ken Roczen, Tim Gajser, Marvin Musquin and even the King of MXGP, Tony Cairoli, after some brilliant battles this season.

But that didn’t matter, America still didn’t realise just quite how fast this bullet flew until he fired his way to victory at an AMA National.

Bizarrely, it was that win not the rest of his phenomenal achievements that has launched the positive and respectful comments. Herlings going fastest in practice in their national championship got more buzz in America than that epic battle between Herlings and Cairoli at Lommel in the world championship – think about that!

Despite MXGP being the premier motocross championship in the world the bottom line is that it took Herlings to beat the Americans in their national championship for them to realise just how fast the Dutch kid really is. That simply should not be the case. Just because it doesn’t happen in America doesn’t lesson it’s value or quality.

It shows the bubble they still live in but Herlings burst it big-time last Saturday, now America sees why the world has been going on about this kid for seven years.

Yes of course they knew he was fast, but not this fast. Now they get it, now they know. Now they see why MXGP is so good.

But finally and thankfully the plaudits are coming, Jason Weigandt compared his win and speed to James Stewart riding a 125, high praise indeed. Fantastic ride, my mind is blown, are just some of the phrases used by the stunned US media this week.

While the rest of the world already knew, Herlings made sure even America couldn’t ignore his blistering speed and he and the world championship series are finally getting the full respect and coverage they deserve.

But he shouldn’t have too, one of the greatest riders the world has ever seen, Antonio Cairoli, shouldn’t have to race an AMA national to prove himself or to get the same coverage and respect Herlings has got this week in the states, it should come anyway because they are proven to be the best in the world.

And if you think you are better, race the full MXGP world championship series to prove it.

Jeffrey Herlings won with the world cheering him on to show America the truth about the standard of MXGP and the speed of the Dutchman. He fought not just for himself but also for respect in America for MXGP – and he got it!

Maybe now America will understand the World championship isn’t US v them, it’s we, America are part of the world, not above it, and we are all in this great sport together.