Herlings expected to take on Cairoli this weekend! 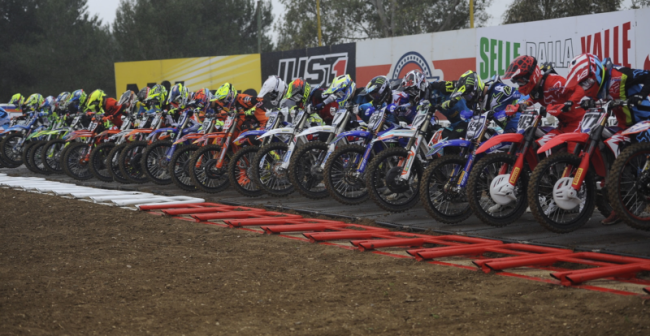 Italian MX PR – Third round of the Internazionali d’Italia MX Selle Dalla Valle Series 2017. Sunday, on the sandy track of Ottobiano (PV), the bigs of Motocross will compete for the titles of the 125 and MX2, that are not yet assigned, while Antonio Cairoli (Red Bull KTM Factory Racing), has already mathematically won the title of Champion of the MX1 class and just lining up at the start will be crowned champion again in the Elite category for which he is the undisputed king; the Sicilian, absent last season, has won for three consecutive editions from 2013 to 2015, jumping only in 2016 due to the injury that had kept him away from the starting gates of the MXGP pre series and conditioned the 2016 World Championship.

In many will try to spoil the fun of TC222, from Jeremy Van Horebeek (Monster Energy Yamaha Factory), which proved to be in great shape in the two previous rounds, as well as Tim Gajser (Honda HRC MXGP), always on the podium, except in the last race, on the Roman track, when a few laps from the end, crashed, ending in fifth place. To this fantastic trio could be added the fourth actor; in Ottobiano is in fact currently riding Jeffrey Herlings (Red Bull KTM Factory Racing), testing his condition after the 10 days of stop, following the inflammation of wrist tendon reported in Sardinia. With the Dutch three-time MX2 World Champion on track, the race would have the incredible number of 15 world titles competing in the world premiere of the challenge of the century.

In MX2 great expectations for the duel between Jorge Prado Garcia (Red Bull KTM Factory Racing), Michele Cervellin (Honda HRC MX2), 2016 champion of the class and Benoit Paturel (Kemea Yamaha Yamalube Racing). The Galician leads the standings with 200 points, 40 points ahead of the Italian and 45 of the France rider.

The duel for the 125cc. class is all played in the Husqvarna Maddii team, with the two young riders Gianluca Facchetti and Alessandro Manucci, first and second in the standings, ready to battle for the supremacy on the Lombardy sand.

Crazy numbers for the Internazionali 2017: after the great success in Riola (OR), Malagrotta (Rome) was sold out, with more than 10,000 people thronged on the track to follow the three classes in the race. In Ottobiano (PV), for the last round, with an impressive pre selling, it is expected the public of the special events. Even numbers of the media at the Internazionali d’Italia MX Series Selle Dalla Valle showed a record season, with the great TV coverage reserved by RAI (Radio Televisione Italiana) to the races with a coverage never seen before.