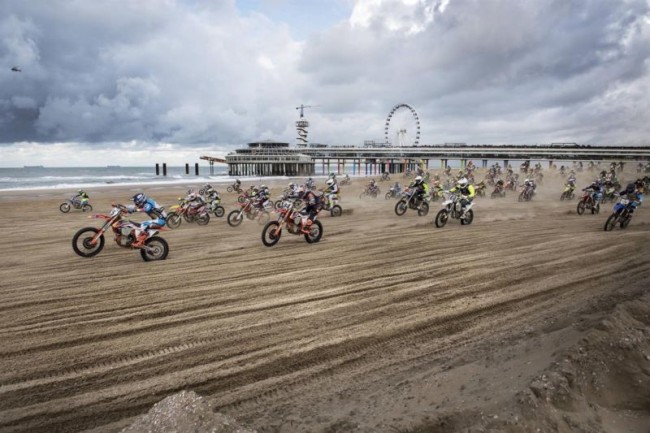 The KTM riders finished the gruelling 20-lap beach race that this year featured a series of challenging obstacles in just under two hours and were the only three of the field to be in the winning lap. Fourth place went to veteran racer Steve Ramon of Belgium and Axel Van de Sande, winner of the last edition, completed the top five.

Jeffrey Herlings the 2016 MX2 world champion won on his KTM 450 SX-F by an impressive 2.29.889 minute margin with Nathan Watson, from the KTM Enduro Factory Racing Team having a spirited battle with Glenn Coldenhoff (factory MXGP rider) in the final stages of the race.

Herlings: “I’m super pleased with the race. We all came here with a big question mark because we don’t have much experience bike-wise and as riders with beach races, and we did very well. I won the heat by two minutes and the final by two minutes plus. We did a great job and I’m very happy for the team. We put it all together and we dominated. This kind of race is nothing like motocross. It’s something different and I’m very happy how it all worked out.”

Watson: “I love the beach races. I did this one last year and I was second. I just missed out on the win so I really wanted to come here again and do well. Then I heard Jeffrey and Glenn were riding and I know it would be pretty difficult. The race went very well I was fighting with Glenn and ended up second so I’m very happy and I enjoyed the race. It’s just such a challenge. So much goes into it. All the tactics, how many times you have to take the pits, all the other riders. It’s a challenge not to crash. You really have to be smart and use your head.”

Coldenhoff said he knew it was going to be tough because he had taken three weeks off after the Motocross of Nations and only had two weeks back on the bike to prepare. “I noticed it in the final part when I was battling with Watson and I came up short a bit. Also the sun was going down quickly and we had the sun in our face in the long straight, so it was a bit dangerous. But I saw on the pit board that I was safe in third. The goal was to come here, to stay healthy and finish on the box and that’s what I did. Watson took a bit more risk with one pit stop and I took two. We just played it safe. We had a lot of meetings with the team to discuss tactics and it was a fun race.”

Even before the first hour was up, the three KTM riders had consolidated their positions at the front. Herlings, who took control of the race just minutes into the opening lap and never looked back as riders and bikes in the huge field of starters started to come unstuck in the tricky conditions and eventually through sheer exhaustion.

Both Herlings and Coldenhoff were very much at home over the whoops and rhythm section and were blisteringly fast down the beach straight that skimmed the water’s edge. But Watson gained the advantage over Coldenhoff in the last hour of the race when the notorious X-Loop was opened. The so-called ‘minefield’ and ‘forest’ sections, the latter over a series of logs, was ideal for Watson’s Enduro skills. The British rider also came to the event after recently taking victory in the Skegness Beach Race in the UK.

More than 70,000 spectators lined the beach and the famous pier for the fifth edition of the race.