Herlings chases down Cairoli for another GP victory! 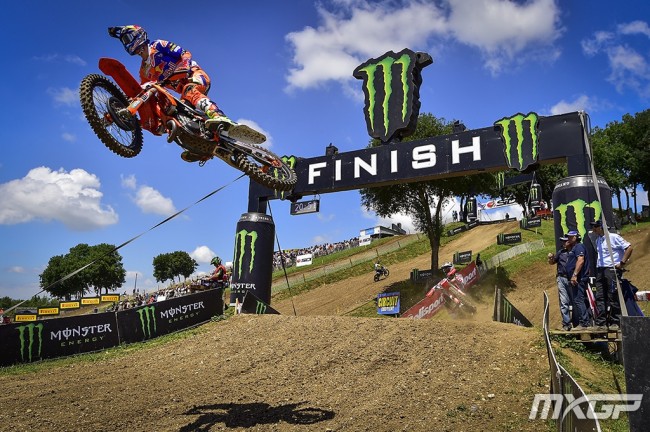 Another GP and it’s another superb Jeffrey Herlings victory at the technical track of Saint Jean d’Angely in France.

The second moto was a completely different story though as Herlings couldn’t grab the holeshot, instead it went to Antonio Cairoli. Herlings was buried in around tenth around the first corner but worked his way into fourth by the end of the first official lap.

Herlings then passed Seewer on the second lap but had a bit of ground to make up on Gajser and Cairoli. At one stage the gap was around ten seconds to Cairoli but Herlings put on a late charge, caught and passed the nine times world champion with four laps to go.

Cairoli ended up second overall but will be left frustrated as he knows he needs to win if he wants to be world champion this year. Cairoli said  on the podium that after the UK GP he wasn’t able to train all week like he wanted because he hurt his knee and that he felt it in the last 10 minutes of the second moto. Hopefully he can be 100% fit for Italy next weekend.

Tim Gajser had a good race as he crossed the line in third albeit thirty-seconds behind Herlings but none the less it’s good for the Slovenian to end up third overall and back on the podium.