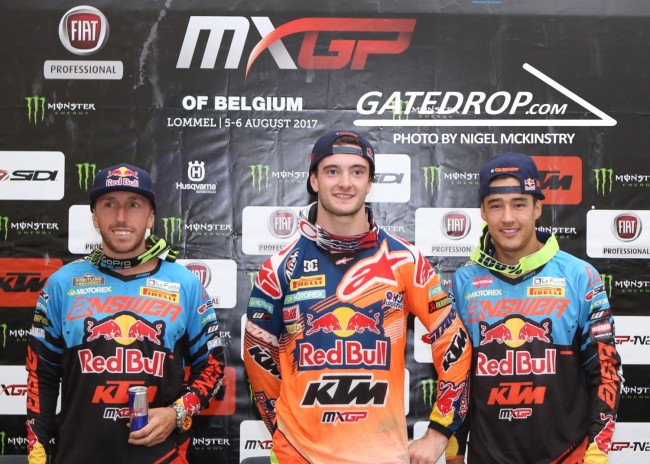 After the tough MXGP of Lommel all three factory KTM MXGP riders spoke to the media as they all ended up on the podium.

Herlings on his Lommel overall victory..

It feels good. We messed up a little bit in Ottobiano. I never like making excuses, it’s not an excuse because Tony won fair and square but I was sick that weekend which means I had something to make up. He got the better of me there but finally I won here in Lommel. I’m super, super happy, I want to thank Red Bull KTM. The team put in so much effort and hard work, they’re doing a great job. You can see this weekend, 1-2-3 in MX2 and 1-2-3 in MXGP so I’m very pleased for that. I couldn’t do it without the great team, they’re always behind me and I’m blessed for that. I had a really good weekend winning yesterday and both moto’s today too. I got a pretty good start in the second moto too, I’m happy with that. There’s five more rounds, the season is almost done already you know. Six races and then it’s done. We’re second in the championship now, KTM is first and second so it would be great if we could finish it that way.

On the Cairoli battle…

Yeah, I like it. You know it’s tough. Obviously, I know Tony a long time and I know that he wouldn’t clean the sh*t out of me so I don’t do the same. To break check a bit and stuff like that, I think it’s okay. We’re team mates and we are both smart enough to know what to do and what not to do. I know he has a championship on the line, I don’t want to clean him out and for him to injured or something like that. It’s been clean racing and I enjoyed it. I’m happy I got the better of him this weekend. In seven days we are at another GP so we will keep on going.

Cairoli on his second overall..

Yeah, it’s amazing. I don’t think it’s happened in the history of motocross that six KTM’s were on the podium, I don’t know if it happened but I don’t remember. It’s amazing what this manufacturer is bringing to the sport. I’m really happy about this and for the rest of the people that work behind us. For the race, I’m really happy for sure. Fighting with Jeffrey who is the fastest in the world in this kind of soil. We had good racing and also with Glenn (Coldenhoff), in the first moto, he was very fast. It was fun this weekend. Also, in looking at the championship we are near the end of the season so it’s time to look at the points and don’t do any crazy stuff. We had some good battle in the second moto but he was more motivated than me for sure to get the win. Congrats to him and congrats to KTM.

On this weekend in Switzerland..

Coldenhoff on his weekend..

You know it’s great, it’s been a while since I’ve been sitting here. I had a good weekend, coming into this GP I felt really strong. I had some very competitive days in the sand and I had a lot of confidence as well. Yesterday I messed up my start a little and it was a tough day yesterday also with the rain. The first moto I had a good start and ran with them. In the second moto from lap two I was thinking about the podium because I have been working very hard for this with the whole crew. I think after Loket we made a great plan and it looked like it’s worked out. I want to thank Valentina Ragni because yesterday we did the track walk and I had some good advice, it looks like it worked out.

On his season as a whole..

It’s very important to end the season well. I’ve felt all year long actually quite good but sometimes I need to have that little step more. I think this year the competition is also very high, if I’m 5% less than myself then I think it can make five places. Last weekend in Loket I actually felt really good but like I said, it’s a tough year.