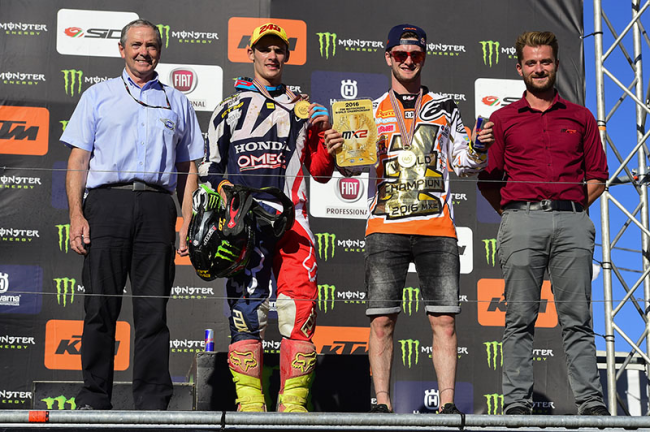 What better way to wrap up the 2016 FIM Motocross World Championship than in the Golden State of California, America, on one of the most incredible tracks in the world, Glen Helen Raceway, where good weather is promised, as is good racing.

As expected, the final gate drop of the 2016 season had the fans that were on site here at the Monster Energy MXGP of The USA, on their feet, and the fans that were back home, glued to their television sets, as Monster Energy Kawasaki’s Eli Tomac recovered from two bad starts and destroyed the field in both races for yet another perfect score and his second consecutive, and second ever, grand prix victory, while Red Bull KTM Factory Racing’s Jeffrey Herlings had a fairytale ending to his MX2 career with a two wins for his first ever grand prix win on US soil.

Monster Energy Kawasaki’s Eli Tomac and Red Bull KTM Factory Racing’s Antonio Cairoli are two of the biggest names in motocross right now. Both riders shook off the effects of their mediocre qualifying results to lead the way in the main events today. Tomac, in particular, was incredible! He takes lines that no one else takes, and just hits the throttle so much earlier than everyone else, and because of it, he cleaned everyone up once again to become the first American to win multiple grand prix’ in the same calendar year since Mike Brown back in 2000.

As for Tony, it was good to see him looking like his former self as he hung it out on the hills of Glen Helen for second overall. The eight-time champ was striving for his ninth world title this year, but couldn’t match the consistent strength of Slovenia’s motocross extraordinaire Tim Gajser. He did claim the silver medal though, and the impact of being the bridesmaid in terms of the championship was softened by the 10,000 euro cheque he was awarded by Fox Head Europe as the winner of the Fox Holeshot competition.

These days the podium doesn’t look right without Honda Gariboldi’s Tim Gajser standing on one of the steps. The recently crowned world champion would have liked to have topped the box this weekend, but instead had to settle for third, which is not so bad considering he only qualified fourteenth after having a yard sale on the first lap of the qualifier. The champ went 4 – 3 today to land on the box for the sixteenth time this season, which is an incredible feat on its own.

Rockstar Energy Husqvarna Factory Team’s Max Nagl flew under the radar this weekend, which is kind of a random statement, since it’s common knowledge he is capable of winning grand prix especially when he gets a good start. The German was a rocket ship out of the gate today and carried that same blistering fast momentum through both races to finish on the same points as Gajser. Because Gajser had the better result in the final race, he was awarded third while Nagl had to settle for fourth overall, but looking at the bigger picture, was happy to have cemented the bronze medal in the premier class this season.

Monster Energy Yamaha Factory Racing’s Romain Febvre didn’t have the desired end to his season, but if you’re searching for positives you’ll hold onto the emphatic qualifying heat win he took yesterday. Today was a new day, and it wasn’t a good one for the Frenchman who had a bike issue in race one and binned it in race two. As a result, he only finished fifteeth overall, but we look forward to seeing him return to the front of the field next year.

Red Bull KTM Factory Racing’s Jeffrey Herlings is one of the heaviest guys on the line in the smaller bike class, MX2, and while he typically races number ‘84’, this weekend he rode with the number 1 plate, a number plate that often weighs heavy on a riders bike. The last thing Herlings needed was extra weight to carry up, especially against the lightweights like Austin Forkner and his Red Bull KTM teammate Jorge Prado, but it didn’t give him any trouble whatsoever. The Bullet bossed it in both motos for two convincing wins, and his first ever grand prix win on US soil. “To finish with a win is amazing, it was my final ride in the lites class and now I will move up to the 450, it’s been a hell of a ride, so many ups and downs, but I’m very grateful for what I have achieved and I hope to have the same success in the MXGP class.”

There is one simple mission in MX2, BEAT JEFFREY HERLINGS! Last weekend America’s national Lites champion Cooper Webb managed to do it, and is the first rider to beat The Bullet fair and square for the overall since Tim Gajser did it in Maggiora, at the MXGP of Italy, last year. Interestingly, all three riders Webb, Herlings and Gajser will go head-to-head on 450cc bikes in the MXGP class at the Monster Energy FIM Motocross of Nations in two weeks time. As for the racing today, the hope of the American fans lied in the hands of their two most touted riders, Geico Honda’s Jeremy Martin and Monster Energy Kawasaki’s Austin Forkner.

How do you handle super gnarly hills? Ask the Americans. A host of American riders schooled some of the best MX2 riders in the world at Glen Helen Raceway in Race 1 with Geico Honda’s Jeremy Martin being the most successful representative of the stars and stripes in this class. Martin was the talk of the town heading in, mainly because he changed brands, from Yamaha to Honda, and was making his debut earlier than most riders normally do. J-Mart, as they call him, went 2 – 2 for second overall, a huge result for the American kid who had only had one week on the bike heading into his first ever MX2 grand prix, and actually missed warm-up this morning due to a mix up of Timetables.

Yamalube Star Racing Yamaha’s Mitchell Harrison is actually from Michigan, although he has adopted California as his home and actually rides here at Glen Helen Raceway every week. Knowledge of a track doesn’t always transpire into good results, so you have to take your hat off to Harrison this weekend. He was on rails and after cutting his teeth on the grand prix scene at the Charlotte Motor Speedway last weekend where he finished seventh, he rolled out today and nailed a pair of fifths for third overall. “I wasn’t expecting to be on the podium, I was just hoping to get a top five this weekend and progress, I got a top ten last weekend. Third overall is incredible for me, so I am excited about it.

Rockstar Energy Husqvarna Factory Racing’s Max Anstie finished third overall in the FIM MX2 World Championship last year and was hoping to either defend that position if not better it. After what has been an up and down year Anstie had to relinquish his bronze medal to Kemea Yamaha’s Benoit Paturel, who was the most consistent rider this year. Comparing the stats, Anstie led 61 laps this year, while Paturel led 20. Anstie won 1 Qualifying Race, 4 Races and 2 Grand Prix’, while Paturel didn’t win any races or grand prix’. While Anstie’s stats look better on paper, Paturel is the perfect example of why consistency is sometimes more important.

Going into race day today, Anstie was 12 points down on Paturel, he managed to claw back 4 points with his fourth place finish here at the Monster Energy MX2 Grand Prix of The USA, compared to Paturel’s sixth place, but it was Paturel who took home the bronze medal.

Team Suzuki World MX2’s Jeremy Seewer didn’t have anything other than pride to race for today as he had already wrapped up the silver medal in the championship last weekend, and the gold medal was out of reach as well. After a lackluster performance in Race 1 where he tangled with his teammate and just had a bad time out on the track for eleventh, the Swiss star bounced back in Race 2 to finish a hard fought third and fifth overall.

Monster Energy Kawasaki’s Austin Forkner finished third in Race 1, but after a bad start, crashed out of Race 2 while charging through the pack.