Herlings and Simpson win at Valence 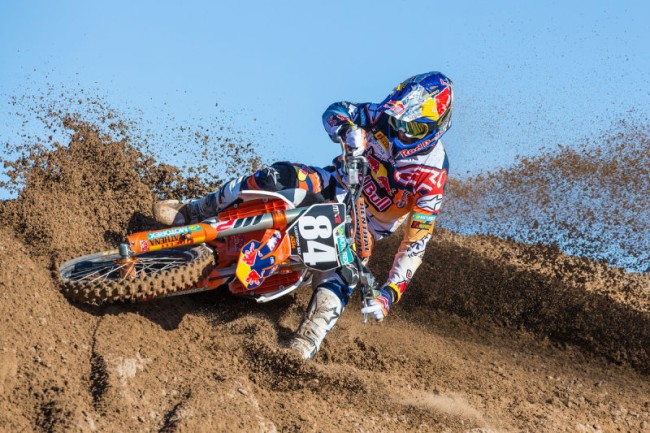 No surprises in the MX2 class at Valence with Jeffrey Herlings securing both moto victories in fine fashion. Jeremy Seewer had a good day finishing second and third in the moto’s, good preparation for the Swiss heading to Qatar.  Davy Pootjes and Maxime Renaux had good rides in the second MX2 race with fourth and fifth place finishes. Maxime passed Alexander Tonkov on the last lap which is impressive considering today is his first appearance on the 250cc machine.

In MX1 Clement Desalle was having a good day as just like Herlings he went 1-1 in fine form. Strijbos and Simpson had good battles in both moto’s to finish second and third behind Desalle as it looked like Desalle was just too good today. Milko Potisek had a good day finishing eighth and fifth in the moto’s on his return to motocross after a big injury in 2015. Ben Townley finished fourth in both the motos – it looks like he has some work to do if he wants to be on the podium at Qatar.

It was time for the Super-final and the day didn’t end well for Clement Desalle. Desalle crashed when trying to make a move on Simpson and the reports are that he could have broke his arm, hopefully this doesn’t turn out to be the case! We will have news concerning Desalle when we hear the full extent of the injury.

You can see the crash here: Desalle crash

Jeffrey Herlings won the superfinal on his 250cc machine – he could make MX2 boring this year, such a shame he isn’t racing the MXGP class. Simpson ended up second in the super-final meaning he won the MX1 overall as he keeps gaining confidence heading into Qatar.