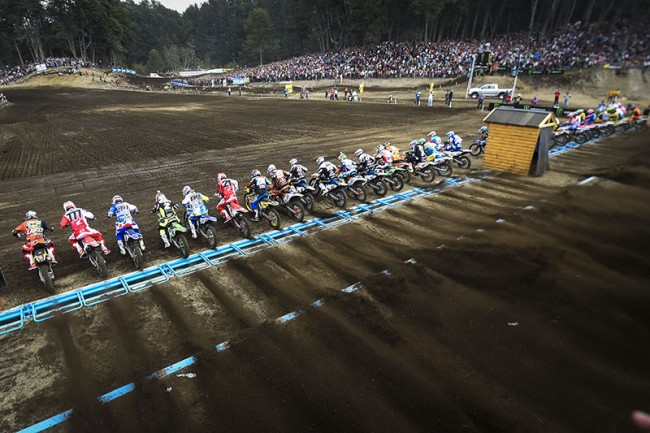 NEUQUEN (Argentina), 28 March 2015 – Boasting everything that makes MXGP the best off-road motorcycling sport in the world, MXGP of Patagonia Argentina embraced breath-taking scenery, a spectacular track and a crowd with passion for motocross that comes second to none.

Inspired by the rowdiness and animation of the crowd and relishing the wide and flowing circuit, Red Bull KTM Factory Racing’s Antonio Cairoli and Jeffrey Herlings wrapped up pole here for round three of theFIM Motocross World Championship.

While the lap chart paints a picture of Red Bull KTM Factory Racing’s Antonio Cairoli pulling a holeshot and controlling the race, just as he did in the first qualifying race of the year, that was absolutely not the case.

When the gates dropped for the first time at MXGP of Patagonia Argentina, the early Red Plate holder Red Bull IceOne Husqvarna Factory Racing’s Max Nagl got off to another flyer leading Cairoli and Team HRC’s Evgeny Bobryshev around turn one. Not prepared to settle or take it easy on lap one, it wasn’t long before Cairoli put an impressive pass on Nagl through the rhythm section to take over the lead.

With Cairoli taking brief control, the current red plate holder Rockstar Energy Suzuki World MXGP’s Clement Desalle appeared to be his element, exhibiting the confidence of his fastest time in Time Practice to charge from sixth place to third before the end of lap one. Although the Belgian did look as though he would go after Cairoli and challenge for pole, he came undone the following lap when he binned it somewhere between pitlane and the waves.

As Desalle remounted, Monster Energy Kawasaki’s Ryan Villopoto was putting his ‘pin it to win it’ style to good use as he bounced back from his mediocre start, and chipped away the eight second lead of Cairoli.

In the interim of Villopoto’s charge to the front he passed the likes of Yamaha Factory Racing Yamalube’s duo of Jeremy Van Horebeek and Romain Febvre as well as Team HRC’s Gautier Paulin and the fading Evgeny Bobryshev, who spent the entire race giving each other grief for fifth.

Approaching the closing stages of the race, the uproar of the dynamic crowd began to dramatically increase as Villopoto had clawed away at the lead of Cairoli and was all over him for the win.

With two laps to go, the champions went at it generating the type of race that fans of MXGP would expect from them. While it was a nail biter, it was Cairoli who kept his cool and held strong to claim his second qualifying heat win of the year. Villopoto finished a well fought second while Nagl came home in a comfortable third.

Fourth place ended up going to Desalle who eventually managed to regroup, while the Yamaha duo of Van Horebeek and Febvre rounded out the top six respectively, just ahead of Team HRC’s duo of Paulin and Bobryshev.

he amazing fans here weren’t shy in showing their appreciation for Red Bull KTM Factory Racing’s Jeffrey Herlings who put in yet another solid performance to remain unbeaten in 2015 while his teammate Pauls Jonass did a similar thing in second.

With the two Red Bull KTM Riders being untouchable out front, the real race was for third as Monster Energy Kawasaki Racing Team’s Thomas Covington got off to another great start and embarked on a bar bashing adventure with Standing Construct Yamaha Yamalube’s Valentin Guillod. After tossing the position back and forth for a few laps it was Guillod who eventually sealed the deal and bought it home.

Meanwhile Monster Energy Kawasaki Racing Team’s Dylan Ferrandis put in an extraordinary performance to round out the top five after being buried way back of the pack in the early stages of the race.