Herlings and Cairoli on their USGP! 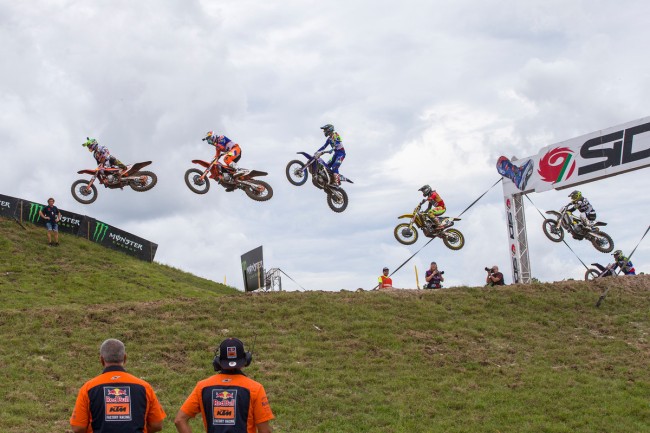 Herlings sprinted to a fourth Pole Position of the season on Saturday and under a grey and ominous sky with Cairoli following in second position and Glenn Coldenhoff rounding out the top six. All three riders couldn’t replicate the bright starts in the first moto on Sunday in sunnier and warmer conditions. Herlings needed six laps to catch Tim Gajser and move into second by which time Eli Tomac had a substantial lead that was impossible to breach. Cairoli had a quiet ride to third spot while Coldenhoff was in a closely bunched second group and rolled across the line in seventh.

The second moto saw Cairoli roar to the holeshot and set the pace from the beginning. He had Herlings for company and the pair were again a level apart from the pack as Tomac laboured in third and admitted afterwards he had no way to fight back. On lap ten Cairoli lost the front end in a rutty left turn and briefly crashed, handing the advantage to Herlings who needed no invitation on his works 450 SX-F. Cairoli went from a championship-winning berth to third place overall and has to wait another seven days before he confirms his ninth crown. With a 96 point gap between the KTM athletes and 100 left in the last two Grands Prix, Tony could be opening the bubbly after the first moto in Assen. The Dutch date will be a home meeting for Coldenhoff who pushed as hard as he could to claim tenth in the second race for eighth overall.

Herlings: “I felt really good today. The heat was pretty brutal but I got used to it and after Ottobiano [Grand Prix of Lombardia] where I fell down after the second moto we decided to come over here early so it wouldn’t happen again. I had a great battle first moto although me and Tony had bad starts and by the time we were second Eli had a big gap. Second was good though and left it open for the overall. I changed my line choice for the gate and had a good one. I was behind Tony and was waiting until the last couple of laps. I knew both of us would be tired but I didn’t want to pass him too quick and I was waiting for a mistake. He had a small crash and handed it over to me. I’m happy with the 2-1, some good battles with my teammate and I hope we have plenty more. Now for my home GP next weekend.”

Cairoli: “I’m always happy to finish on the podium and in a season like this it is important to be consistent and that’s what we have done: one of my best seasons ever. I want to get the title as soon as possible because I have been riding a bit carefully in the last races. I don’t want to crash or break something. I did my best to close it today and I made a mistake but this is part of racing and also my condition is dropping a little bit since the beginning of the season whereas as Jeffrey is the opposite way and is in a good place. I am a fighter and always want to fight back. I hope I will make it in the next GP in Assen, which is a track I really like, and hopefully clinch the title in the first moto, and then after that have some good battles. Together with Jeffrey we have showed that we have some good speed lately and we are ‘there’ most of the time.”

Coldenhoff: “The results were not that great but I had a tough weekend. Yesterday was quite solid and I was always there with the times but didn’t have the starts. The first one was better than the second. The hot conditions are not the best for me but I suffer well. Overall I’m not too happy although we made the top ten and we’ll do better at the home GP next weekend.”

The first MX2 moto could not have started worse for Pauls Jonass. The Latvian misjudged the gate drop and was clipped by Jeremy Seewer, veered into Jorge Prado and crashed on the start straight. Jonass recovered the 250 SX-F and fought his back through the pack together with his teammate. Pauls arrived to a creditable tenth place, right behind Seewer for minimal damage to his lead in the championship standings but Prado was unable to complete the distance and needed treatment for heat exhaustion, therefore being ruled out for the second race.

Jonass was harried by two Americans in the second moto for fifth position and even survived a last corner attack and contact by Mitchell Harrison to make sure of a top five finish (and seventh place overall) on what was a hot, tricky and difficult day for the series front-runner. Pauls lost a little of his cushion over Seewer and the distance between the pair sits at 40 points.

Jonass: “I knew it would be tough. It was hot and humid and we’re not used to this and I made it a bit more difficult for myself. I didn’t get good starts today and crashed on the start straight in the first moto; to come back to tenth from dead-last was not too bad. I lost only one point in that race. I had a better start in the second race but it was so hot and it was difficult. The track was also bumpier and I couldn’t find my flow. Still, I managed to finish fifth and now I’m looking forward to the next GPs. It will be hard…but we’ll get there.”

Prado: “Some bad luck today. I touched with Pauls at the start of the first moto but came back really strongly until tenth with a good rhythm. About four laps from the end I couldn’t continue. I’m a bit down because I think I could have done well here at a circuit that I liked a lot and felt comfortable on the bike. I had some attention in the medical centre so couldn’t go out in the second moto and it was probably the right decision because it wouldn’t have been safe and possibly dangerous for my health. I hope next weekend in Assen we can make a good show.”

Onto Assen now for the Grand Prix of the Netherlands and local events for two of the Red Bull KTM athletes for what will be the eighteenth and penultimate fixture of the season and after seven months of world championship competition.