Herbreteau and Fernandez impress at final Dutch round! 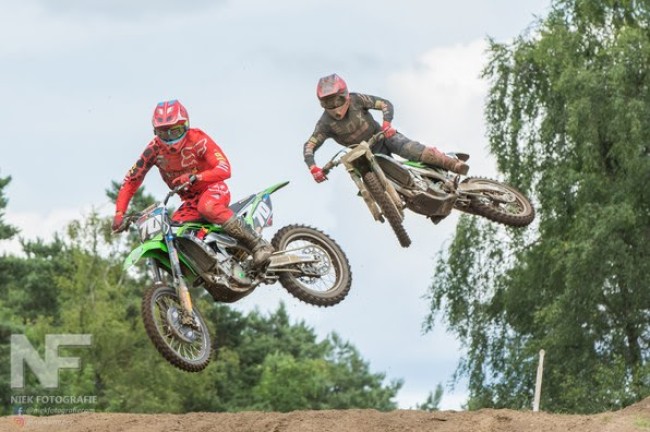 David Herbreteau had a good weekend on his F&H Kawasaki during the final round of the Dutch Masters of Motocross. The talented French rider finished fourth during both the main moto’s as he continues to improve as the season progresses. Ruben Fernandez also showed good speed during the final round as he finished fifth overall. Things didn’t go as well for Magne Klingsheim as he took a crash in the first moto and that was the end of his day due to a headache.

During the first race of the day. Herbreteau took the holeshot and won the HGS Holeshot award. He led for the first few laps before Olsen and Bogers found their way around the French rider. At the half way mark, Covington also found his way through but DH338 ended up an impressive fourth spot.

Fernandez was sitting in eighth on the first lap but worked his way up to a very good fifth spot by the end of the moto even closing in on his team mate. Klingsheim was battling for a top ten spot before suffering from a big crash. He was dizzy for the rest of the moto but came home in sixteenth. Together with the team it was decided not to take any risk and because of that he didn’t contest the second moto of the day.

Herbreteau couldn’t replicate his holeshot in first moto as he was just outside the top five on the first lap of the second moto. He ended up fourth again in moto two but less than twenty seconds behind Bogers who won the moto, he is clearly making good progress and the speed is good.

Fernandez was in eighth on the first lap but worked his way up to sixth by the end of the race which meant he ended up a strong fifth overall behind his team mate. A good weekend for the F&H Kawasaki outfit.

Herbreteau moved up three spots in the championship as he was sitting seventh before the last round but ended up an impressive fourth. Fernandez stayed in a solid eighth spot in the series.

The team will travel to Czech Republic this weekend for the GP of Loket. The team hope Klingsheim can be back in action while Herbreteau will be hoping for another top ten result.