Harry, Stefan and Liam on a big EMX125 win for the Everts family 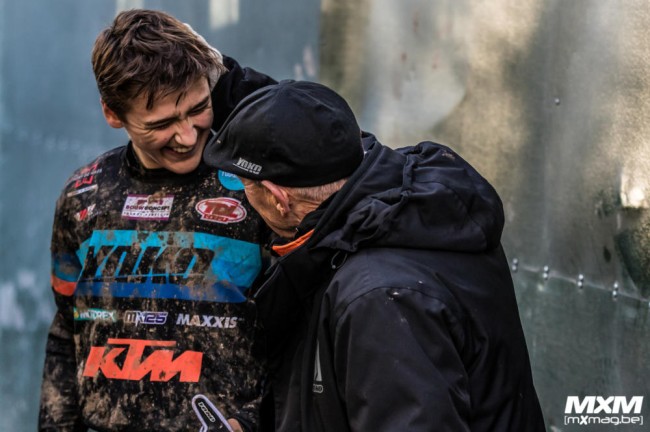 It was an emotional time for the Everts family at Matterley Basin as Liam, the third generation of the family dynasty, won his first big race on the site of Stefan’s last win and race of his career. To dovetail even more, Liam made his pass for the EMX125 overall win around the outside of Brumann in the very same turn that Everts passed James Stewart, aptly names Everts corner!

I remember walking through the pits that morning in 2006 as Stefan, 33 years old at the time, was blowing up a small paddling pool for Liam, then a toddler, to play in before going out on a high by giving James Stewart a riding lesson in the ruts. Now, 14 years later, Liam is himself on the top step at Matterley Basin himself in the biggest win of his burgeoning career.

A proud Stefan said to Lisa Leyland after the race: “It helps forget all the misery I had last year. My last podium was here in Matterley when I retired and now his first podium in Matterley. It’s fantastic, it’s a great celebration in our family to see this happening.  He did a great job today and yesterday, congrats to the other guys who are on the podium. It looks like we are going to have a good season, hopefully he can maintain this fitness and stays healthy.”

An emotional Harry, who had a tear in his eye commented: “This means a lot. when I was watching Liam riding I was thinking about Stefan here and the last race he did and I see Liam in the same corner (passing for the lead) with completely the same style like Stefan, he was so clever riding and it’s something (to remember) for many years.”

And a delighted Liam said: “I have been waiting a long time for this, it’s been a lot of hard work, to finally pay off for the first win it’s really nice. but I wont stop working I will keep on working as hard as I can.”

Liam, however, won’t have much time to celebrate as he will now change machines and ride a 250f KTM as he competes in the MEX250 class this weekend in Valkenswaard but that first win will live long in the memory for the Everts family.