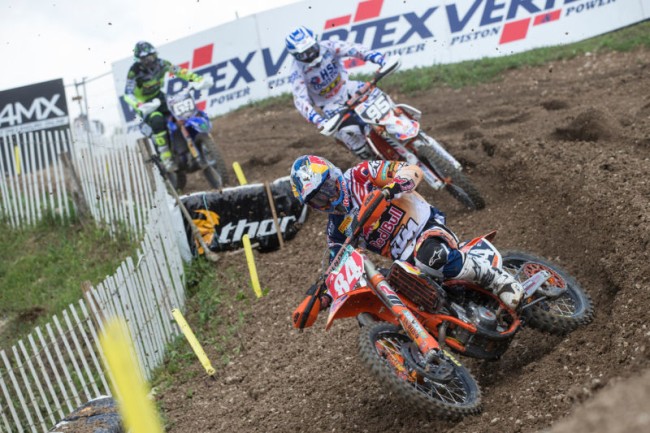 MX2
Jeffrey Herlings, also the first rider to win three times at the French venue, divided his race day into two different episodes. Entering a heavily watered track in his first moto, he rode cautiously in the opening stages, tucked into third place behind Jeremy Seewer and home favorite Benoit Paturel who exchanged the lead in the early laps. Twelve minutes into the race Herlings had moved into second and then began to chase down the leader. He put in his fastest lap on the KTM 250 SX-F with three laps to go and went on to win by almost six seconds.

Then after getting forced off line by another rider at the start of his second moto, Herlings fought back hard from 12th place, and at the end of lap nine closed in on race leader Max Anstie. One minute later he took control and crossed the line with a comfortable 2.5-second margin.

Herlings: “We made it ten in a row this season, I’ve only lost one moto where I finished second and we should be really happy. This track is not one of my favorites but my first moto was good, the second not so good but overall with the qualifying and the two motos we won all three races. I think we can look back on a very good weekend.”

Herlings said he was looking forward to racing the next round in Matterley Basin, UK, adding that the tracks that follow would suit him well. Commenting on his 57th career victory, the Dutch rider said he hoped to achieve his long-term goal to surpass the existing current record of 100 career GP wins.

In what was two very hard fought motos, MX2 teammate Pauls Jonass put in two consistent races to wrap up his day with a 5-5 for a solid overall fourth on the difficult hard pack French track.

Jonass: “I’m not the best rider on tracks like this but my speed was pretty good yesterday and I had a good start in qualifying. Today I didn’t manage to get good starts. It was difficult to pass and you needed to take some risks. Maybe I was struggling a bit in passing guys but I finished with two fifth places and fourth overall. I put in two consistent races and I’m third in the points. Now we’re going to sandier tracks and that’s better for me, so I’m looking forward to the next GPs.”

MXGP
It was a day of mixed fortunes for Red Bull KTM’s Tony Cairoli in two motos that were dominated by eventual winner Romain Febvre and second placed Tim Gajser. But Cairoli once again displayed the strength of character to fight back to save overall fourth. He finished third behind the two leaders in his opening moto on the KTM 450 SX-F but was tagged by another rider at the start of race two in what was a multi rider melee. Cairoli scrambled back in the action at the back of the field, and with sheer determination fought his way back to finish in seventh place.

Cairoli admitted he was disappointed and was expecting more from himself, even if he made a good recovery in the second moto. “This time I had the speed and good condition and I was able to make passes even if I had to come back from last. I got back into the top ten and then I crashed again, but still finished seventh. I was disappointed in the first moto when I should have attacked. It’s not ideal for the championship but we keep looking forward. I will work harder and try to win from now on, and see if we can get closer to the leaders.”

Teammate Glenn Coldenhoff showed definite signs of improvement on the difficult French track to take a 9-5 result for overall sixth.

Coldenhoff said he has started to feel very confident, adding: “It wasn’t there with my times but I felt good on the bike. The first moto I took a very good start behind Tony in second place but in the beginning I couldn’t find my rhythm and dropped back to finish ninth. The second moto was not so good out of the gate and I think I took a wrong line. Then I made a mistake in the second lap and many guys passed me. But I managed to take them all back. This was my strongest race of the year after a lot of hard work.”

EMX250
KTM Factory Junior Jorge Prado continued to be impressive in his new class where he is racing against riders that are older and physically bigger than the 15-year-old Spaniard. Despite a crash in his second moto, he picked up a creditable 3-9 for overall fifth this weekend and is certainly on his way to better things.

Prado: “Yesterday we did third and it was pretty good, but I think my riding wasn’t like today, where it was really good and I think it was my best race until now. I did have a crash when I made a small mistake after about 15 minutes but I was in second place and fighting for the lead and just giving everything. I tried to come back with a good rhythm and I finished ninth. It was a good race for learning and every weekend it’s getting better and better.”