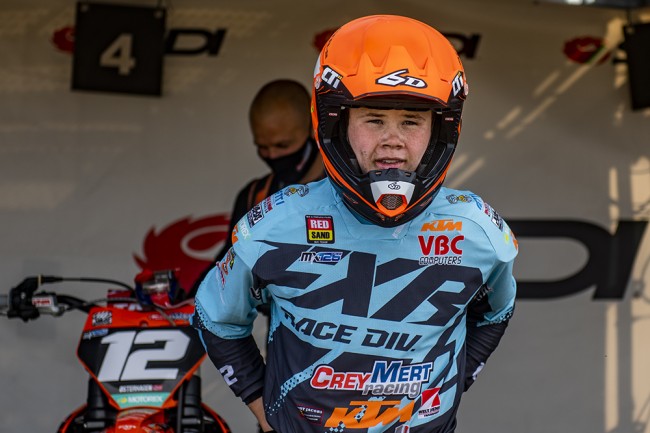 After making progress last weekend in Spain, Hakon Osterhagen went to Lommel with a good feeling on his CreyMert KTM. The Belgian track was a challenge to all the riders as it was very rough and bumpy but Osterhagen took to the tough conditions like a duck to water. The Norwegian went 6-2 for fourth overall meaning he just missed out on the podium, but he certainly had the speed. Guillem Farres took the overall win with Andrea Bonacorsi extending his points gap in the championship.

The day started off well for Osterhagen as he put in the third quickest time in his group during qualifying to give himself a good gate pick.

In the first race, Osterhagen took a great start as he was holding the early lead on his CreyMert KTM. On the first lap, Braceras put pressure on the young Norwegian and made a pass but Osterhagen didn’t panic and picked up the pace after being passed. When trying to repass Braceras unfortunately he crashed and dropped down to ninth. Determined to move up towards the front of the pack again, Osterhagen made some passes and ended up an impressive sixth – if it wasn’t for that crash, he had the pace to win.

Just like the first moto, Osterhagen took a great start and was holding the early lead. On the first lap the CreyMert KTM rider had a five second lead and looked to assert his authority at the front of the pack. A couple of mistakes came into play at a track that was very easily to make a mistake, Farres caught and ended up taking the win but Osterhagen came home in a brilliant second spot – the best rest of his career in the EMX125 class so far.

Osterhagen (4th overall): In the first race I got an amazing start as I took the holeshot and was first until the second guy took me in a corner. I was 2nd for some laps but I was stressed and was pushing too hard into a corner and crashed. I dropped down to 9th fought up to 6th spot. In race two, I took the holeshot again and was leading for some laps, but the 2nd guy was riding amazing and got past me and was making a gap. So, I thought that I didn’t want to many any mistakes and I got second. It was the perfect day, and I am aiming for the podium on Tuesday.

On Tuesday, the EMX125 championship will continue again at the Lommel circuit so Osterhagen and the team will focus on a quick recovery and hopefully battle for a podium again!