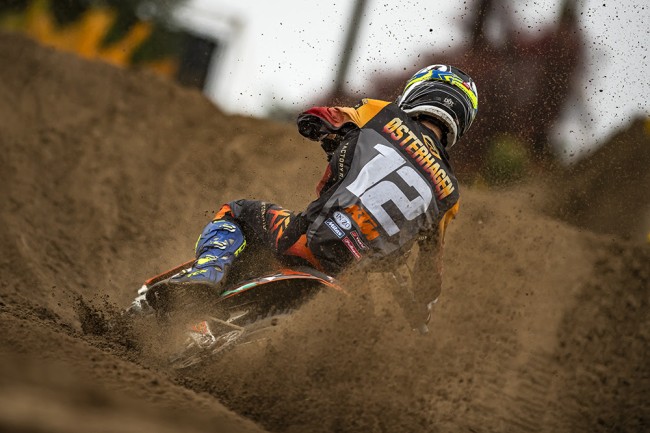 At the final round of the EMX125 championship it was an emotional one for CreyMert Racing team as it was their final race as a team. Young Norwegian talent, Hakon Osterhagen made sure he ended his and the team’s season on a high note at the Lommel track in Belgium. It was a fourth overall on the day for Osterhagen which moved him up to tenth in the championship. Max Palsson won the final round with Andrea Bonacorsi clinching the title!

After putting in the fifth quickest time during his timed practice group, Osterhagen had a reasonable gate pick for the moto’s which is always important. In the first moto, the Norwegian got a decent start as he came out of the first moto in the top ten. Feeling good around the deep sand track, Osterhagen quickly moved his way up to seventh and by the end of the first lap he moved up to fifth. Locked in a battle with Bonacorsi for fourth, Osterhagen’s speed was good and they even caught Razzini. Even though he was riding well, Osterhagen had to settle for fifth which was still a good race.

There were all sorts of carnage around the first corner in the second race but fortunately, Osterhagen just about missed the chaos but he didn’t have a good start. At the end of the first lap he worked his way into ninth but not happy with that he continued to move forward and ended up fifth place again.

5-5 was enough for fourth overall and it moved him up to tenth in the final championship standings – a good season and a big improvement from last year.

After eight years in the Grand Prix paddock, CreyMert Racing have decided to close their doors but have enjoyed running the team at the highest level.

Hakon Osterhagen: Today was another good day. Going 5-5 for a 4th overall. The track was very fast and a little scary in my eyes, but the riding was good. I felt good on the bike and finished 10th overall in the championship standings. It’s sad that it’s was the last race for the team. They have been so supportive and helpful to me the two years I was there; they were like a little family to me. Sad that they quit but that is how the game works.

Dominique Heinderson: We had a lot of fun doing it but it’s enough once we both think it’s the right time to call it quits. We would like to thank the sponsors for their support of our team. Furthermore, of course everyone who has been involved in whatever form.