Greg Smets in for EMX250 round at Lommel 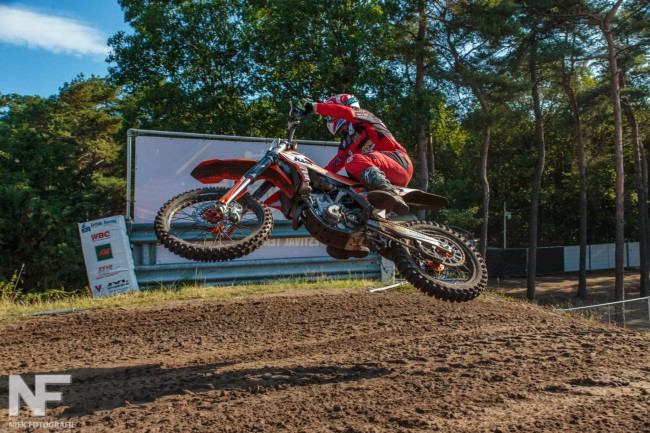 With the KTM Diga Junior Racing Team having both EMX250 riders, Emil Weckman and Matheo Miot both out injured, the team have been searching for a fill in rider.

For the MXGP of Belgium set to take place at the deep sand of Lommel this weekend, they’ve given Greg Smets the opportunity to contest the EMX250 series this weekend.

It’s a good opportunity for Smets to race in front of his home crowd.

“The teams workshop is only 15 minutes from our place so we know the team already for a long time. Last year DIGA also helped me with my EMX300 trip to Spain and got us in contact with someone to go to Russia.
It still came as a surprise when Dirk called me to ride in Lommel. After we talked to Dirk personally we came to an agreement where I could combine my personal program (the regional races) with the European race in Lommel”, Smets commented.

“We’ll see what the weekend brings. I just hope to get through qualifying and have two good races.  I want to thank Dirk for the opportunity to ride for the team and also all the people who help me get through the season. My mom and dad, my sister, my girlfriend, my mechanics, all my sponsors and everybody else who supports me”, added Smets.