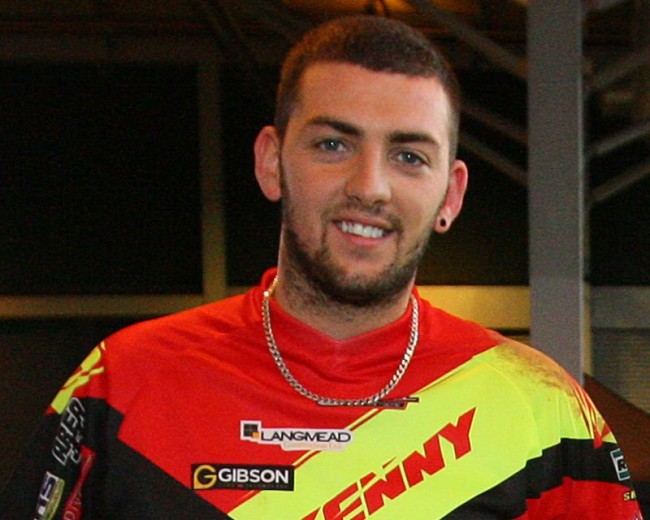 Hot on the heels of the recent announcement that the newly formed FRO Systems Elite team is to contest the 2017 Monster Energy Arenacross Championship, the firm has now revealed that the team will field former AX Pro champ hotshot Adam Chatfield as its lead rider. Ashley Greedy, a popular character on the AX scene, will be the team’s second Pro rider.

Twenty-nine-year-old Chatfield was, of course, the first-ever AX champion back in 2013 and is massively popular with the crowds. When AX presenters DJ BBQ and Jeff Perrett stir the fans into a frenzy and encourage them to support their home-grown racers, there is little doubt that Chatfield is a firm fave.

The significance of that fan support was evident towards the end of the 2016 championship when Chatfield dug deep to finish the series third overall, infiltrating the French invasion, and winning the final explosive round at London in the process. Looking ahead to the 2017 Tour, Chatfield said; “I’m really happy to be part of the new FRO team. I’ve known Mark for a few years now and I know when he does something, he does it right. We will have a great set-up and I’m ready to start off where I finished last year – on top. It’s great that a new team will be on the AX circuit, and I trust Mark to put everything in place around me so that I can go out and get the job done.”

Twenty-five-year-old Welshman Greedy is also a regular AX crowd-pleaser and with his ‘all-out’ style of racing, there’s never a dull moment when he’s on the circuit.

Happy to announce the first major element of his AX line-up, FRO boss Mark McCann added; “Adam will be riding a 450 Honda and will be our number one rider. He’ll be racing in Brazil until November and then testing at our private facility. What’s more, AX track builder Justin Barclay is building him a track upon which to practice.

“We have worked on and off with Adam since he was about 14 and are really excited to be working with him at this level. He is a home rider who has the ability to win. We have talked about this for years and are now pleased it has finally happened. Of utmost importance to us as a team is to run British riders in our British team and we’re also happy to welcome Ashely, one of FRO’s longest running athletes, to the fold. We are going to have a lot of fun.”

Welcoming both the new team and Chatfield to the 2017 AX Tour, e22Sports promoter Matt Bates said; “Mark and I have been speaking for some years now about Fro Systems entering a team and I’m so pleased that eventually we’ll be seeing yet another Arenacross-only team line-up for the first event on Jan 7th in Manchester. It proves that the media coverage and sponsorship exposure that the series offers is the best in the UK and with the forthcoming announcement of television coverage, Arenacross really is an amazing place to promote Motocross. We all wish the Fro Systems race team every success.”

Check out www.arenacrossuk.com for the latest AX news.