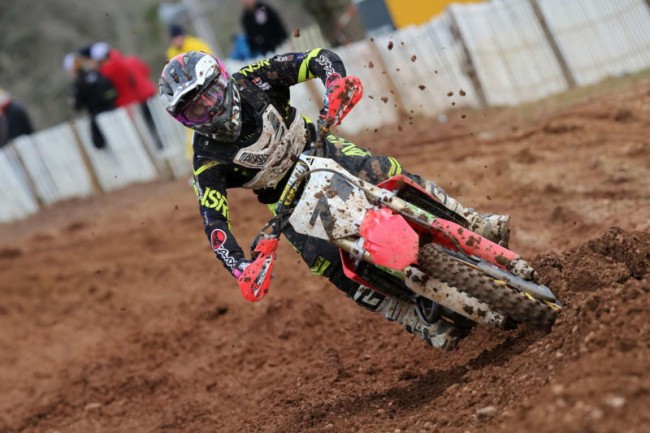 The Lacapelle-Marival motocross was the last pre-season stop for many riders before the Qatar MXGP World Championship opener. For Belgium’s Damon Graulus the French International was his first competitive outing in a long time. Damon immediately lined up in an admittedly strong field.

Literally days before the 22-year old had received his 2017 Honda CRF450R. Unintimidated Graulus rolled up his sleeves and posted some impressive lap times in the morning. Underlining both his hard work over the winter and the potential of his new bike Damon posted the 6th time in free practice. He would go on to qualify 7th in front of Paulin, Tonus, Simpson, Nagl, Boog and Aubin. Doing it on a completely stock bike, except for the ProTaper handlebars, made his feat even more remarkable.

The former Franch, Dutch and Belgian MX2 champ got off to a great start in the first moto. Fourth out of the gate he only had to let Tonus go by in the opening lap but Graulus was comfortably following the pace of the race leaders. All day long riders had been complaing about strong winds. Hitting the big double Damon got in trouble by a huge gust of side wind. He was dragged next to the track and hit his head pretty hard in the process.

The start of moto 2 saw another great getaway for the 24MX Honda rider. Although he lost valuable  positions due to an aggressive manouevre by Aranda it was obvious that Graulus didn’t have the pace he had demonstrated earlier in the day. In the end he crossed the line 12th.

Damon Graulus: “I definitely have mixed feelings about this race! In terms of pace I was pretty happy. Obviously I knew from practice that my speed was not too bad. However to place where we did in qualifying on a standard motorcycle came as a complete surprise! Those typical Mistral winds had caught more riders off guard but I honestly don’t know what I have could done differently. Shaun Simpson who was behind me told me how he’d seen me literally being carried away for meters!
I was quite a bit shaken after that. But all in all it could have been so much worse. I thought I was fit enough to line up for the second moto. In hindsight that was a stupid move. I never felt myself like I did before in that race. Luckily all of that should be forgotten quickly with a couple of days rest. I’m looking forward to continue the development with the new bike!”