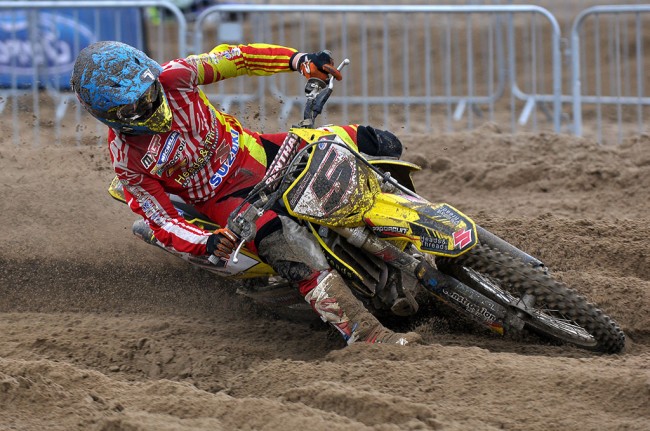 It hasn’t been the season Graeme Irwin envisaged at the beginning of the year. But despite mechanical setbacks, Irwin has shown mental resilience to make the podium at the last two Maxxis British championship rounds putting himself in position for a top five finish in the series, and is currently in contention to win the MX Nationals.

Added to that Irwin scored points at the British GP and has just signed a deal with Buildbase Honda while also being called up for team Ireland for the MXoN in France!

All in all it hasn’t been a bad year but the dedicated and determined Irwin is always pushing for more, he wants a British title and still harbours aspirations of getting into MXGP.

Gatedrop caught up with Graeme to talk about his season so far.

Gatedrop: How frustrating were the first few rounds of the British Championship?

Irwin: Very, very frustrating. I didn’t do any testing with my race bike this year. But I had a really good off-season, I put in a lot of work. I did a lot of fitness training off the bike. I felt I was prepared and riding really well. We went to the first round and had a few clutch problems that day. Every race within half a lap the clutch was gone. We got some factory clutch plates and didn’t test them, we assumed they would be ok. But I think they only world with a factory clutch basket or whatever, so the clutch was gone after every half a lap in every race, it was slipping really bad. So that was the first round, it wasn’t very good at all.

At Lyng in the first race I was fourth until the last lap and I had to push the bike round the last three corners, lucky enough most of it was downhill. I think I still got sixth. Then the next two races, I was in the top three or four and the chain snapped. I just felt it was so, so unlucky. What people forget is, if it wasn’t for those two races I would be third in the championship now. It was out of my hands there was nothing I could do.

At Blaxhall I rode good there and were unlucky not to get on the podium. At Foxhill we just missed out on second overall (third overall and first podium) and Preston we had strong rides including coming from the back and got another podium. It has definitely been up and down but I think it has been pretty strong.

I still have a chance of winning the MX Nationals I am seven points behind Kristian ( who leads) so I need to go 1-1 and I need him to get a third and a second and I win it. It’s definitely doable, we have all had out bad luck this year, so fingers crossed I can do that.

Gatedrop: How big a relief was it to get your first podium this season? 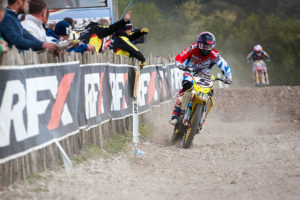 Irwin made the podium at Foxhill. Pic: Suzuki PR

Irwin: You come into the year expecting so much more so it had been really, really, disappointing. Before Blaxhall I had been using completely standard front forks, just how you buy it from the shop. We didn’t change anything inside. Then I started working with a guy Gav from Gforce and since then we have been on the podium in nearly every race.

Gatedrop: At the British MXGP I think you were struggling with the forks at the time but you still showed good speed and got some points, how did you find that weekend?

Irwin: It wasn’t too bad but still nowhere near where I wanted to be. That’s where it hit me I was struggling with forks, because it so bad that weekend. I didn’t feel comfortable landing off the big jumps straight into braking bumps. I didn’t feel comfortable at all and it was frustrating. Whenever you put so much effort in and you go to an event like that, you want to have a good result, but you know things aren’t right.

The start of the year was really annoying, I do a lot of training and I feel I am one of the fittest guys out there, but the rougher the track got, the more I struggled. Finally we made the decision to work with Gav and Gforce and things have been going a lot better.

Gatedrop: You were supposed to do the GP in the Loket but you didn’t, what happened there?

Irwin: I don’t know, I was told the week before I wasn’t going and I just accepted it. The British GP didn’t go how I wanted but I am a lot more comfortable on the bike and the Loket GP would have been a different story.

Gatedrop: Is it frustrating not to get to do more GPs, Simpson is racing there every week and is dominating British Championship and the rest of you guys aren’t able to get a chance to see that GP speed and get faster.

Irwin: Yeah I totally agree, Shaun is riding with so much confidence, he is riding the best be ever has. This year there has been a lot of sand which is different to previous years too, I think we only have one hard pack round which is Foxhill. So that is different too.

Gatedrop: You have been selected to ride for Ireland again at the Nations but surprisingly you are having to ride the 250 instead of the 450, have you got any time on the 250 yet? 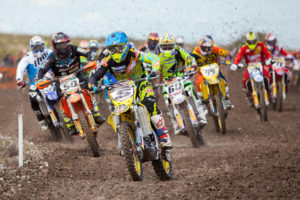 Irwin: No I haven’t ridden 250 for a long, long time and nor will I because I have the MX Nationals the week before and the bikes go to France the Tuesday after that race, so it’s a real bummer I won’t get much time on it. It would have been nice to be able to ride the 450 but I’m going to go no matter what. Unfortunately I can’t just put my suspension in the 250 from my 450 because one uses spring and one uses air, so it will be completely different for me.

Gatedrop: You got a top ten overall on the 250 at Lommel at the Nations in 2012 and it’s a strong team on paper, so do you think Ireland can avoid the B final?

Irwin: Yeah definitely, I think the speed is still there on the 250, when I get to the qualifying race I think everyone knows I will give 100% and if I can bring some of the speed from the 450 to the 250 I think we should be flying.

Gatedrop: Is it hard to get noticed by the GP teams when you are riding the British championship plus maybe one GP and the Nations?

Gatedrop: It’s just been announced you have signed for Dave Thorpe’s Buildbase Honda team next season, one of the best teams in the British championship paddock!

Irwin: I had a couple of really good offers and I took the best one that will give me the best chance of trying to win the British championship. I am really excited, this is a really good opportunity for me, to have the chance to work with and to ride for Dave and the rest of the team is something I am really looking forward to. I have showed good consistency over the last two seasons, and I hope with Dave’s input and the potential of the new bike I can step up a level next year.

Gatedrop: Your about to become a dad in the next couple of weeks too, will that help your racing?!

Irwin: I think everyone in life gets to the point where they want to settle down, I am married, so it’s not like I just knocked some girl up! I have a good base, a nice place where we live and it just feels like it’s the right time to have a baby. I don’t want to wait till the end of my career. People say that will harm your results, but it’s only a distraction if you let it be a distraction. I am lucky that I have Brooke, she does a lot of the work and really helps me. Even when I got married people said it would have a negative impact – but the ring doesn’t weigh that much! If anything I’m in a routine more now than I have ever been in my life, Brooke helps me and we do it as a team, everything is based around motocross, and when we have good result we both win because all the hard work and sacrifice we have both made is paying off.