Graeme Irwin and Harri Kullas on the Podium at Mx Nationals 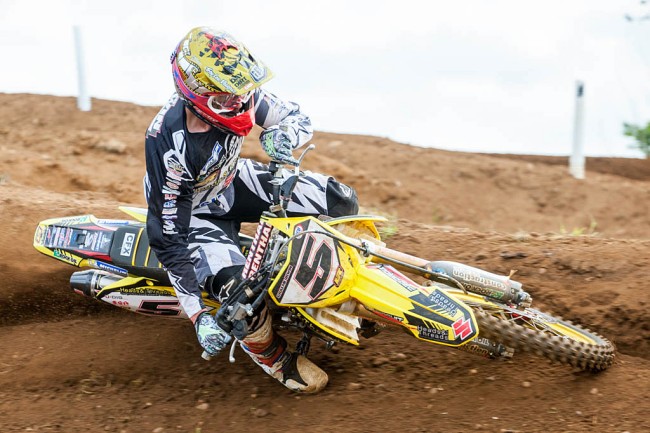 With the third round of the MX Nationals held at Culham Park, the Heads and All Threads Suzuki team were looking to continue their good form in Oxfordshire.

Despite a less than perfect gate pick, Kullas made a great start in the first of two races, and rounded the first corner in second with Irwin squeezed back in 14th. As Kullas battled to stay near the front, Irwin was pushing through the field, and at the half way point Kullas had dropped to 7th, with Irwin charging into 5th. As the race drew to a close, Irwin continued to charge and climbed into 2nd with Kullas picking up 6th (5th MX1) on the last lap.

Race two saw the Suzuki duo in front with Kullas taking the holeshot. As Irwin made his move to get ahead of his teammate, the series leader, Kristian Whatley seized his opportunity to get in front. The top three had gapped the rest of the field and settled into their positions with Irwin crossing the line in 2nd and Kullas behind him for the pair to claim 2nd and 3rd overall, respectively.

“I got a bad start in the first race, and it took me a while to get going. It wasn’t until the last third of the race where I started to be consistent. I was riding good, but when you’re behind people you can’t really get going.
It was a good start in the second, behind Kullas, but when Whatley got by us he pushed and made a gap.
I don’t think I’m really pushing enough at the start, whereas Whatley is putting in a few fast laps and doing the damage early on. If I can ride a bit smarter, I may be able to push him a little bit out of his comfort zone.” — Graeme Irwin, #5

“I didn’t feel great on the bike in the morning, the set up wasn’t really what I wanted, and after a good start in the first race I suffered with arm pump. I just tried to finish the race as best I could.
We made a big change on the bike, and I felt much better in the second race. I got the holeshot, so I tried to push the first few laps to get a bit of a gap. Graeme and Whatley passed me, but I knew 5 – 3 would be enough for 3rd overall, so I just tried to stay with Graeme and settled for 3rd.
It’s been a good couple of months with a few podiums here and there. We’ll just try and keep it going.” — Harri Kullas, #51

“Really good day. The bikes worked well, but it is hard to get a perfect set up on that type of track. Graeme had a bad start in the first race, but showed tremendous speed to come back to second, and Harri has shown he has the pace to run at the front. To get them both on the podium is a real positive result.”  — Neil prince, Team Manager.