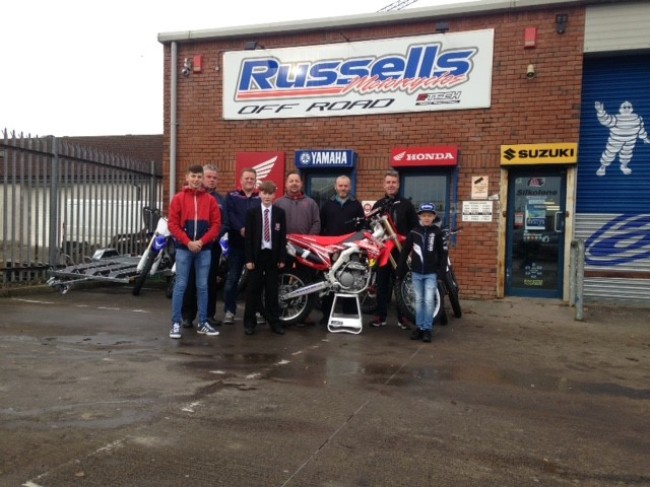 The MCCNI are pleased to announce the first confirmed championship for the 2017 season in the form of the Graham Ross backed GR7 Ulster championship. This will be an exciting 6 round championship run throughout the 2017 season. As of yet we are still confirming dates and tracks but what we can confirm is that the dates will not clash with the RHL British youth championship and one track that can be confirmed for at least one of the rounds is the full Desertmartin GP circuit. Graham has managed to secure some fantastic financial backing from Russell’s motorcycles, KareKabs Taxi service, Car Care Centre, G and G Ross Stone crushing as well as worldwide tool company Milwaukee Tools. The total prize fund gathered for the series is a fantastic £6800.

The way the series is going to work is a bit different from last year with the adult’s dash for cash race being scrapped and the prize money in the adult classes instead going towards overall on the day positions in the relevant grades at each round of the series. In the junior classes one class will be selected in turn at each round to win Russell’s motorcycles shop vouchers. The series itself will be geared towards all level of riders with 50, 65, 85cc bw and sw, mxy2 ,A, B and C adult classes all being catered for on the day.    Listed below are the prize funds which are up for grabs at each round-

Russells Motorcycles vouchers for one selected kids class per round:

To be eligible for any prizes you will need to have a 2017 club licence.

Speaking to Graham on his thoughts on the series and what his vision of the 2017 GR7 is, he said

“I have been trying to pull together plans for 2017 for a couple of months now and it’s great to be finally in a position to release the details for it. After a successful 2016 GR7 campaign the plan was to look at how we could better it for everyone in 2017 and raise the bar on an already successful series.  I have been fortunate enough to secure some extra financial support to help next year from Dale at Milwaukee, Paul at KareKabs/ Car care Centre and Stephen and Deidre at Russell’s all coming on board to help. The idea behind the format next  year was to try as always to give  as much back to the riders as we can in all classes and giving everyone a fun competitive days racing. I have been in the sport now for many years and have learnt that the key to a good series is listening to all the riders on what they want and try your best to deliver it to them.”

We also spoke to the following backers of the series on why they are supporting it, they said

“We are delighted to be involved again this year with the MCCNI in form of voucher sponsorship towards the GR7 championship. We found the vouchers worked very well for us and our customers new and old last year. Hopefully our help and support will enable to keep propelling the club to bigger and better things in 2017.”

“The club have always been a great family orientated professional run motocross club and it is great to be able to support Graham and the MCCNI next year in what they are doing. I hope by bringing Milwaukee Tools on board for the GR7 will help boost an already successful championship.”

“I am delighted to be able to give my support to Graham and the club for 2017. Graham and the club have done a lot over the past few years for motocross in this country and it’s nice to be involved in achieving their goals for 2017.The series itself will be great for my own son Ryan to compete in at home through 2017.”

Speaking to Alywyn Potts MCCNI club chairman regarding the series he said:

“Graham has been a big supporter of the club over the last few years and it’s great to be running the MCCNI GR7 yet again in 2017. This series was very successful in 2016 which we hope to carry on into 2017. It’s great to see at present times when series sponsorship is hard to get such high profile sponsors and backers coming on board to support the club which I would just like to take this opportunity to thank them for all on behalf of the MCCNI.”

Pictured above at the press release at Russell’s Motorcycle Shop in Carryduff are from left to right David Robson, John from Karekabs, Graham Ross, Ryan Mawhinney, Dale Mcelveen from Milwaukee Tools, Alwyn Potts Club chairman, Stephen Price Russell’s  M/C and Reece Ross. David, Reece and Ryan will be competing in next year’s GR7 championship. All three North down riders will also be competing the full British youth championship as well as Ryan competing in the Honda 150 European championship. All three have been very successful at home as well as across the water in England in 2016 and are looking forward to progressing this into 2017.

Please keep an eye out with dates and tracks to be confirmed in the coming weeks but this will be a series not to be missed.