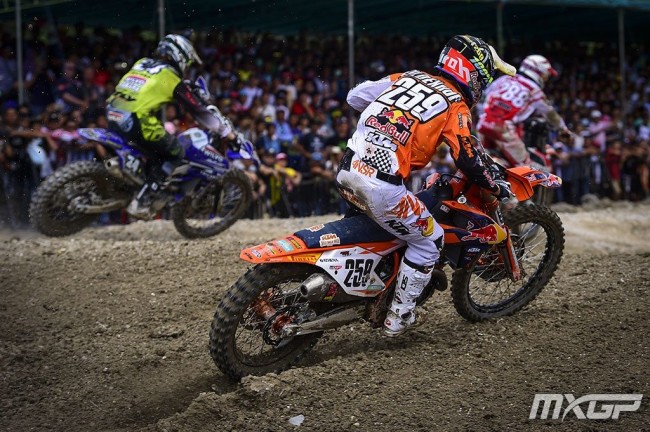 Red Bull KTM Factory Racing have confirmed that their current rider roster will remain the same for the 2018 FIM Motocross World Championship after Glenn Coldenhoff signed a contract to compete alongside Tony Cairoli in MXGP next year and on the KTM 450 SX-F.

The 26 year old Dutchman has already graced the podium of the premier class this term as the squad holds a hefty 91 point lead with Cairoli in control at the top of the MXGP points table and third teammate, Jeffrey Herlings, lies in fourth place, just 5 points from a KTM 1-2.

#259 has offered solid feedback on the development of the 450 SX-F (all official KTM riders have earned silverware with the motorcycle in 2017) and his working relationship with the entire team has been an important factor in the general high level and performance of the crew in what is arguably the most competitive field seen in MXGP.

“I’m really happy I have the opportunity to stay with KTM for another year,” said Glenn from his Dutch base and from a position of 11th in 2017 MXGP standings. “The co-operation within the team is really good and they provide me with the best material, conditions and circumstances to fulfil the job. I will continue to work with the same people so we can keep on building.”

“I feel like I am still growing as an athlete and a racer,” he added. “And I’m sure with this team the results will come.”

“We are pleased to continue with Glenn. We have had two positive years with him and have always worked with enthusiasm and great will to improve,”commented MXGP Team Manager Claudio de Carli. “Glenn is very well integrated into the team and always ready to work in training, in physical preparation and in bike development. We think that Glenn has the potential to achieve a bit more in terms of results, and our goal is to make him fight for the positions he deserves in Grand Prix. This renewal for a third year means that we trust him, we want to motivate him and the whole team is ready to do their utmost to help him to express and demonstrate his value to KTM.”

“When we signed Glenn we knew we were getting a smart and studious rider and one that would take some time to settle in, find the right feeling with the bike and then push-on,” said KTM Motorsports Director Pit Beirer. “We also knew he would fit well into our factory team and this has been very much the case, so it was easy to imagine Glenn again being part of our plans. We know with three years with Claudio and the boys we’ll be able to see some more of his full potential.”