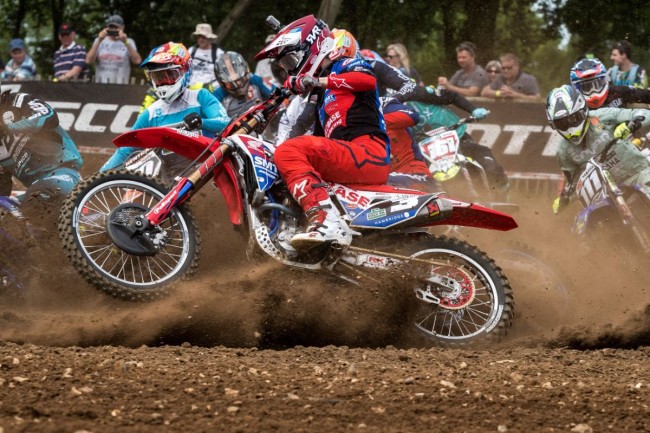 Josh Gilbert raced to a career-best first overall and moved to within one point of the MX2 series lead with a stand-out performance at round four of the Maxxis ACU British Motocross Championship supported by Pro Clean at Blaxhall.

The Cornishman narrowly missed out on the overall at the sandy Suffolk circuit on a tie-break in 2018 but he went one better this time around, topping the podium with a 1-4 scorecard to claim the overall on his CRF250R. Unfortunately, it was a much tougher day for Josh’s team-mate Lewis Tombs who broke his hand in a first-turn pile-up in the opening MX1 moto.

After qualifying in third, Josh started the opening moto near the front and took the lead at two-thirds distance which he held to the flag to win by over 13 seconds. In race two he was second after the first lap but lost a couple of places following a mistake at half-distance, although a fourth-placed finish was good enough to put him on top of the podium.

“If I’m honest I didn’t feel comfortable all day but I managed to pull it off,” said Josh. “In the first moto I took a bit of time to settle down and I dropped to fourth for a little bit but I regrouped, found my rhythm and got back into second and then the leader ended up having a bike issue which was lucky for me.

“I’m just one point off the championship lead and I can’t complain about that. I was using far more energy than I should have but I’ll take 1-4 for the overall every time.”

Lewis headed into his home round of the championship looking to advance on third place in the title hunt on his CRF450R but went down in the opening turn of moto one in an incident that saw the race red-flagged and was sidelined for the rest of the day.

“I got caught up in a first turn crash in the opening race and it was a nasty one,” he said. “I’m gutted to be fair, I’d had some good results leading into today – I just hope everyone is all right because it was a big one. It was easily the worst crash I’ve ever had.”

Team boss Dave Thorpe knows the highs and lows of top-flight motocross as well as anyone.

“It’s been an amazing day for Josh but a brutal one for Lewis,” he said. “Josh rode really well. I think he found it hard though – he was racing against three grand prix men – but he got his head down and battled and won the first race well. He was a very strong second in race two until he made a mistake but he knew fourth would give him the overall and he used his head.

“It’s been a great day for Josh. He’s won the overall and is just one point behind in the championship at the halfway stage and I couldn’t ask for anything more from him. Everyone’s working hard and we’re obviously doing it right and it’s lovely when your man’s on the top step of the podium.

“In the first MX1 race in the first turn there was a very bad crash and Lewis got caught up in it. He was taken straight to hospital and he’s broken his hand. It was a nightmare for him but he got off much more lightly than Ryan Houghton and we wish him a speedy recovery.

“It was a tough day for Shiaru and he finished out of the points but he continues to make progress.