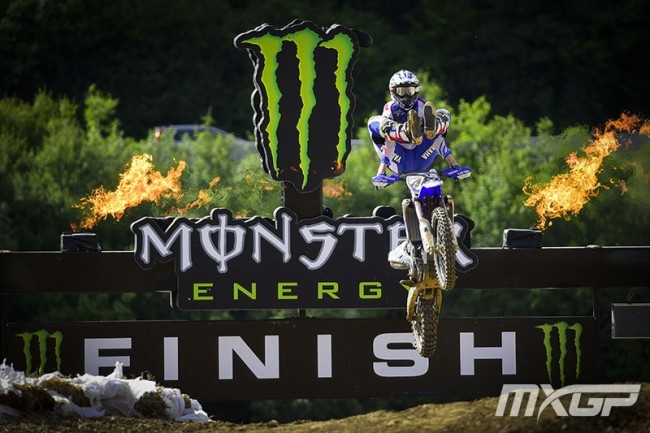 Jeffrey Herlings sensationally crashed on lap one of race one in MX2 and broke his collarbone.  The Dutchman went over the bars trying to scrub the hill that also caught Eli Tomac out at the MXDN two years ago and went down hard. He tried to remount but the pain was too much and Herlings rode into the pits with a lot of pain and frustration at his mistake.

Herlings is reportedly going to get an operation and try and race in Sweden in two weeks time.

It was man of the moment Tim Gajser who won the race after passing Alex Tonkov, the Russian crashed hard during the pass, injured his shoulder resulting in another high profile DNF.  Guillod was second and put in the fastest lap of the race on the last lap with Tixier third yet again.

In race two it was Max Anstie who dominated to get a deserved win, while Tim Gajser rode smart to take second. Unlike Herlings he didn’t risk everything to take the moto win when second was good enough for the overall. Impressive maturity from the 18 year old.

Jordi Tixier and Valentin Guillod hit the gate but Guillod came through to fifth and again posted the fastest lap of the race on the last lap. Tixier was in the wheel tracks of Gullod but went down and came back through to sixth.

A great ride by Jeremy Seewer gave him third in race two with Julien Lieber bouncing back from a difficult few GPs to get a fourth.

In MXGP Tony Cairoli almost grabbed the holehot in race one but the cautious Italian was already down to eleventh by the end of lap one. He then crashed with Todd Waters and came through to 14th but immediately dropped his injured arm off the bar, Cairoli is still hurting.

This left the door open for Romain Febvre and the Frenchman did what he had to do and won the race. He passed early race leader Dean Ferris and held off a spiritied charge from Bobryshev and is now looking like the guy to beat for the title.

Bobby finished just two seconds behind with Paulin and Van Horebeek just behind the big Russian. Kevin Strijbos finished fifth with Simpson sixth after Ken De Dycker crashed out. It hasn’t been a good day for factory Red Bull KTM.

In race two in was Cairoli with the holeshot and the Italian led for the first lap until Dean Ferris went by. But Cairoli stayed in the four way fight for the lead for 20 minutes with Ferris, Paulin and Febvre before going backward slightly to sixth. But it was still a brilliant ride from the injured world champion.

Further back Strijbos pushed his way past Ferris for third in the moto and third overall while Van Horebeek got Ferris for fourth on the last lap after going down on lap one.

Evgeny Bobreyshev came from last to seventh but missed out on the podium despite being in a three way tie for third overall.

Febvre has a nine point lead in the championship over Nagl in second. Cairoli is somehow only 17 back of Febvre with Paulin 45 bach in fifth as they head to Sweden in two weeks.