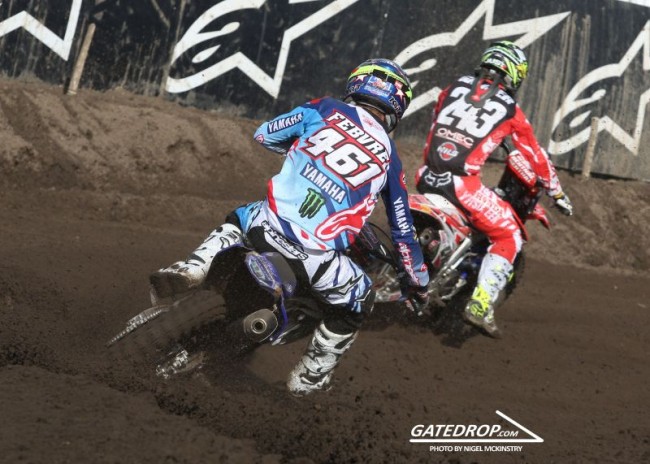 TEUTSCHENTHAL (Germany), 04 May 2016 – The season so far has been wilder, crazier and tighter than ever as only 1 point separates the current world champions, Monster Energy Yamaha Factory Racing’s Romain Febvre and Honda Gariboldi’s Tim Gajser, in the premier class heading into the seventh round of the FIM Motocross World Championship which will take place this weekend in Teutschenthal, Germany.

Teutschenthal will have a lot to live up to this weekend as one of the most history rich stops on the calendar. The first ever round of the FIM Motocross World Championship to take place at the old school venue was back in 1971. It has since held 20 rounds, and on top of that, the 2013 Monster Energy FIM Motocross of Nations, which set the world on fire with Germany, the hosting nation, racing with the numbers 1, 2 and 3 as the defending champions. Unfortunately, they didn’t win in front of their home crowd, instead the victory went to Team Belgium and their line up of Clement Desalle, Jeremy Van Horebeek and Ken De Dycker, two of which, Desalle and Van Horebeek, will be racing this weekend.

It was all champagne showers here last year for both riders that are leading the championship. Monster Energy Yamaha Factory Racing’s Romain Febvre won in MXGP while Honda Gariboldi’s Tim Gajser won in MX2, which means this weekend will be a true test of the best.

Not only is the grand prix victory on the line, so is the championship lead. Gajser seems to be in his element at the moment, he’s been insanely fast and incredibly smooth and in turn has won the last three grand prix’. Meanwhile Febvre seems to be a little bit frustrated. With that said, it has been said that a podium finish isn’t enough for the defending champion. He wants to win! Which is understandable and believable if you watch the intensity he rides with. In saying that, he seemed pretty happy to be on the box last weekend after spending the majority of it fiddling with bike settings.

As per usual, Red Bull KTM Factory Racing’s Antonio Cairoli is coming in as the most winning-est rider. He has won three grand prix’ here in Teutschenthal as well as both races at the 2013 Nations for the overall in his class. Last weekend in Latvia, the Italian came oh-so close to topping the box for the first time in almost a year. He went on to express his frustration of being knocked to the second step of the podium saying, “I want to win,” with an immediate repeat, “I really want to win, I want to win bad.”

And then there is the local, Rockstar Energy Husqvarna Factory Racing’s Max Nagl, who seems to be reinvigorated and ready for a win. The traditional hills of Teutschenthal are bound to be riddled with Nagl fans, who is yet to win at this venue. Imagine if he gets the job done this weekend? Ze Germans might actually topple the fences in excitement.

For Monster Energy Kawasaki Racing Team’s Clement Desalle, this track has had some bittersweet memories with both the bitter and the sweet occurring on the same day. At the 2013 Monster Energy FIM Motocross of Nations, the Belgian crashed on the first corner in the final race and broke his shoulder. That was the bitter. The sweet part came on the same day when he was able to stand on top of the podium as the winner of the Monster Energy FIM Motocross of Nations, which for any rider lucky enough to do so, is one of the best moments of their careers. Putting the cherry on top of the cake, he also won the MXGP overall in 2014.

Rounding out some key points for the MXGP class, Monster Energy Yamaha Factory Racing’s Jeremy Van Horebeek always seems to be lurking around the podium, inside the top five, yet has only got up there once, in Thailand. While in other news, we also have to make mention of Team HRC’s Evgeny Bobryshev, who was the breakout star in 2011 when he won both motos in the premier class for his first ever grand prix victory. Even to this day, it is his only overall win, so another is must be on the cards some time soon.

Astonishingly, since Teutschenthal has been on the calendar for almost forever, Red Bull KTM Factory Racing’s Jeffrey Herlings has only won here once, back in 2014. The Bullet is a bit of a legend worldwide but out in this neck of the woods, he is also remembered for his massive scrub gone wrong which saw him break his collar-bone about 15 seconds into the Qualifying Race on Saturday last year. This time around, he might not scrub THAT hard, and he will probably remain unbeaten.

Rockstar Energy Husqvarna Factory Racing’s Max Anstie finally uncorked a bottle of fizz last weekend. The Brit was the bridesmaid to Herlings, in second, which as said before, basically feels like a win for these guys in MX2. Last year he was second behind the eventual world champion, Gajser, and while he’ll hope to lay the smack down on Herlings, chances are he’ll be stoked with yet another podium finish.

Red Bull KTM Factory Racing’s Pauls Jonass is always fun to watch. He always rides his hardest and that means ‘pin it till you bin it’. Unfortunately for the MX2 vice world champion, he’s been binning it way too much and now sits third in the championship, 37 points down on Team Suzuki World MX2’s Jeremy Seewer in second.

Speaking of Seewer and that points gap, the Suzuki star has made it clear that consistency is his goal, and so far, he is doing a good job. He’s been on the podium five times on the bounce and will be looking to make that six this weekend.

Meanwhile, Monster Energy Kawasaki Racing Team have their full MX2 line up back with the return of Dylan Ferrandis. Both he and Petar Petrov were inside the top five last weekend after putting in creditable performances. Ferrandis with a fifth overall after two months off the bike, literally, and Petrov with a near holeshot and fourth overall, next stop? The box.