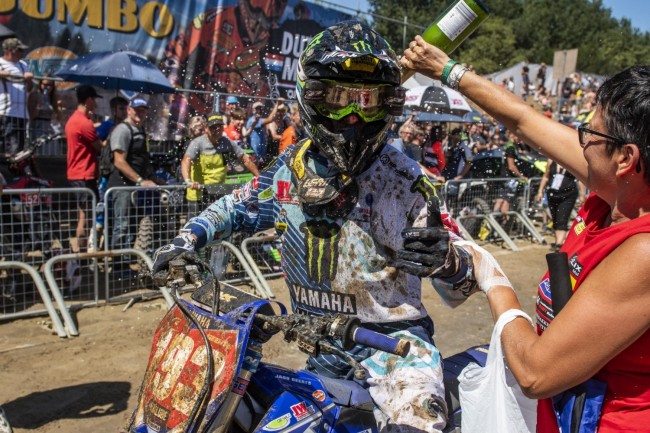 Jago Geerts won the Dutch title 250cc (MX2) in his first season with the ‘big boys’. The 18-year-old Belgian finished third (3+4 in motos) in the last race of the Dutch Masters in Lichtenvoorde. And that was sufficient to grab the title.

Geerts arrived at the Zwarte Cross in Lichtenvoorde with some doubts. The Belgian teenager was still suffering an ankle injury, which he sustained last weekend in the Grand Prix in Semarang. The Kemea rider went to his physiotherapist almost every day last week to be as fit as possible for the race in Lichtenvoorde.

Geerts fought through the pain barrier and rode two consistent motos. In the first moto the Belgian teenager came back to third place after a poor start. In the second moto Geerts took the holeshot on his YZ250F. He was leading for 20 minutes, when he made a mistake an crashed. Geerts could resume in fourth place and decided to stay there, as it was sufficient to take the Dutch title.

Teammate Anthony Rodriguez took the leading role in that second moto. The Venezuelan, seventh in the first moto, proved that he’s an excellent sand rider. He took the victory in that heat, which gave him a second place overall behind Calvin Vlaanderen, but just in front of his teammate Jago Geerts, who grabbed the Dutch title.

The 2018 Dutch champion commented: “Of course, the world championship is the most important, but it’s nice to have this Dutch title on my honors list. Also, for Kemea Yamaha it’s nice to have an extra title. To win a championship in my first season on the highest level: not bad at all. I’m also seventh in the world championship MX2. To be honest: things are going better than expected. The switch to the MX2 went very smooth. A big thanks to everybody at Kemea and Yamaha. My bike is super. Just like my team. We all stick together, we are like one big family. That’s something I really need to perform well.”