Geerts on beating Prado: I really didn’t expect it 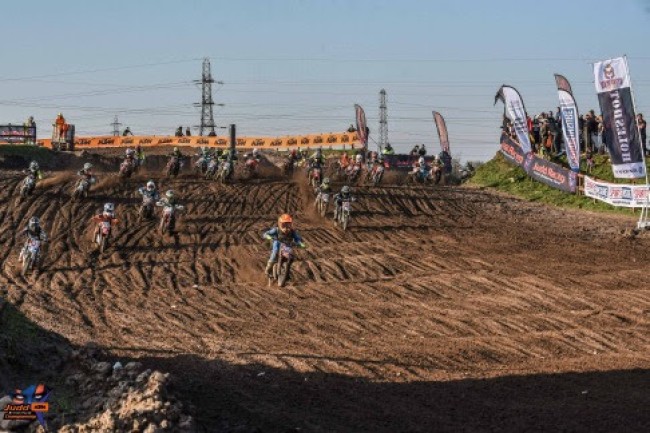 Jago Geerts took his first race win ever in the MX2, in round 7 of the FIM world championship in Saint-Jean d’Angély. The Belgian teenager finished second (1+2) in the Grand Prix and is now third in the world championship classification. His Monster Energy Kemea Yamaha team mate Ben Watson finished sixth (12+3) in France.
Jago Geerts felt really comfortable on the hills of Saint Jean d’Angely. The Belgian teenager showed his talent and speed already on Saturday in the qualifying race, by finishing second. Geerts was the only one able to put pressure on world champion Prado.

MASTER CLASS
The two protagonists of Saturday continued their battle during the first race on Sunday. Although Geerts didn’t have the best start (he was squeezed between some riders in seventh position) he made some aggressive moves in the beginning of the race and was already riding in third position after one lap. Three laps later he passed Cervellin after a great move. Meanwhile, Prado had already created a gap of five seconds. Geerts started hunting the reigning world champion and immediately set the fastest lap of the race. Three laps from the end the gap was reduced to only one second. Geerts pushed hard on Prado, who started to make small mistakes. Jago’s first attack – he passed the Spaniard using an outside line – was the good one. Geerts took his first race win ever in MX2 after a master class performance.
Meanwhile, Murphy’s law (everything that can go wrong, will go wrong) continued to haunt Ben Watson. The Brit had a mediocre start (15th), but went down in the first lap when he couldn’t avoid a crash in front of him. Ben had to start all over again from 32nd position. Watson – who never stops fighting – rode an impressive catch-up race, that eventually earned him a 12th spot.

FAST WATSON
Race two was almost a copy of the first one with Prado again taking the holeshot and Geerts in 4th position after one lap. One big difference this time: Ben Watson was also up in front with the top guys, in second position.
Geerts quickly moved up into third place after a splendid move on Sterry. The two Monster Energy Kemea Yamaha riders went behind the leader. After seven laps they switched positions and – like in race 1 – Jago started to close the gap on the Prado again. Lap by lap the Belgian teenager came closer, but unfortunately he made a small crash at the end of the race. Luckily, he could stay in second position, which earned him a second place overall. Meanwhile, Watson came under a lot of pressure from Evans, but the Brit kept cool and finished third in race 2 and 6th overall.
Both Monster Energy Kemea Yamaha riders moved up one place in the world championship classification. Geerts is now third, Watson sixth.

“My first race win in MX2, what a great feeling. I’m the first one to beat Prado this year. I really didn’t expect it. That makes it extra special. I could close the gap on Jorge and put him under pressure. He started to make small mistakes. My first attack was the good one. The second race was almost a copy of the first one. I came back on him again, but made a small mistake. I immediately knew I could forget about the overall win. A bit of a disappointment. On the other hand: I’m second with exactly the same points as the world champion. Not bad at all.”

“12th place in the first race isn’t a great result. I got washed out in the first lap, I couldn’t do anything about it. My footpeg was stuck in another wheel, so it took me a long time to get back. But my catch-up race was pretty good. I was quite happy with my riding. In race 2 I finally had a good start. That’s really important because the tracks are too easy, too fast, too flat. I could fight with the top guys again. Not easy, because I didn’t have that intensity for a while. I’m really happy with that third place, after some difficult weeks. Finally, I can go home with a good feeling.”

“A great weekend for the Monster Energy Kemea Yamaha Team. Geerts was really impressive. He is the first rider to beat Prado in a race this year. On a track which is not his favourite. Splendid. Now Jago needs to maintain this level. If so, he might win a Grand Prix this season. Where, when? No idea. I’m also happy with the performance of Watson. Unfortunately, he had bad luck – again – in the first race, but he fought hard to come back to 12th. We know he’s capable to fight with the top riders. Something he proved it in the second race. That result must give him a boost.”