Geerts and Watson on their 1-2 at Rhenen 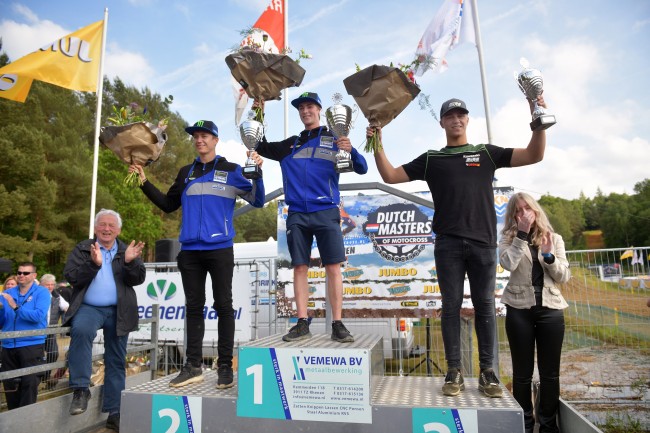 The Monster Energy Kemea Yamaha MX2 Team dominated the third round of the Dutch Masters in Rhenen. Jago Geerts finished on top of the box after winning both races, team mate Ben Watson took second place (3+2). With still one round to go Geerts is now second in the Dutch Masters, Watson third.

Geerts took a decent start in the first race and was already in the lead after two turns. Jacobi tried to follow the pace of the Belgian teenager, but had to back off after a few laps. Meanwhile, Watson recovered from a small mistake in the opening lap and came back into third position. The Brit fought hard to pass for second, but finished in third place.

Same story for Geerts in the second race. He took the lead after the second turn and immediately made a comfortable gap. Watson, who started in sixth place, felt good on the Dutch soil and moved up into second place.

“First and second: a great result for our team”, said Team owner Hans Corvers. “Geerts was amazing today. He took a big step forward this season. I’m also happy with the performance of Watson. Ben had a lot of bad luck lately, but is getting better and better. He looks more like his old self again.”

“A perfect race day for me. I started pretty well in both races and could take the lead in the first lap. I managed to make a gap pretty fast and could control the race. It was a nice victory and also a good training on a difficult track. I had a good feeling the entire day. I’m especially satisfied with my starts, which are very important if you want to win races.”

“I made a small mistake in the first lap of race 1 and dropped to 6. I rode a little bit too slow in the beginning, but found the right rhythm after a few laps and came close to second place. I didn’t have such a good start in race 2, but could come back to second after a nice race. I’m feeling more like my old self again. I am looking forward to continue this in Russia.”