Geerts and Watson on dominating the MX2 class at Riola 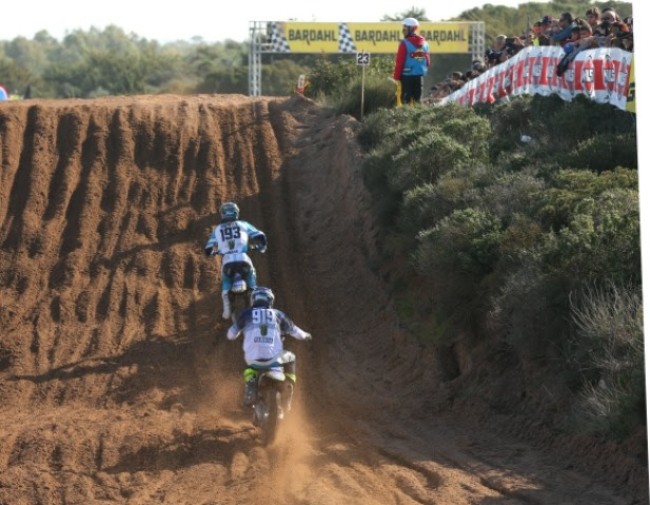 The Monster Energy Yamaha Factory MX2 Team started the 2020 season with a victory. Jago Geerts won in Riola Sardo (Italy) the MX2 race, in front of his team mate Ben Watson. Both riders performed also well in the Superfinal – together with the best MXGP-riders – finishing fifth (Geerts) and sixth (Watson).

Geerts powered his YZ250FM immediately in the lead in the MX2 race. Team mate Watson was the only one who could keep up with the pace of the Belgian teenager. The Briton was pushing his team mate the entire race, but couldn’t pass him.
Both Monster Energy Yamaha Factory MX2 riders started well in the Superfinal, together with the more powerful 450 bikes. Like in the first race, Jago and Ben stayed together almost the entire race. Tim Gajser, reigning MXGP world champion, won the Superfinal. Geerts was the best MX2 rider in fifth place, right in front of team mate Ben Watson.
“It’s always nice to start the season with a victory”, stated team manager Marnicq Bervoets. “But we have to be honest: the competition was not that tough in MX2 today. It was a good training session for our riders. They both took two great starts, quickly found a good rhythm and kept a decent pace until the end. On the one hand it was nice to see them battling against each other in both races, but on the other hand it was a bit scary, because we don’t want to see them crash together. We need to start with two riders in the world championship.”

“I am quite satisfied with my riding today. I took the holeshot in the MX2 race and found a good rhythm immediately. Near the end of the race I started to have arm pump, but I managed to keep a decent speed. It’s nice to start the season with a victory. I also took a good start in the Superfinal, but it was difficult to compete against the more powerful 450 bikes. All in all it was a good training, because the track was physically quite demanding.”

“I am happy with my day. It’s only the first race of the season, so we are all just getting back into the groove of things. I managed to take two good starts and rode two solid races without any mistakes. It’s nice to get the first one out the way and we can now work on the weak points and focus ahead to the next race in Hawkstone Park to prepare for the first Grand Prix in Matterley Basin.”