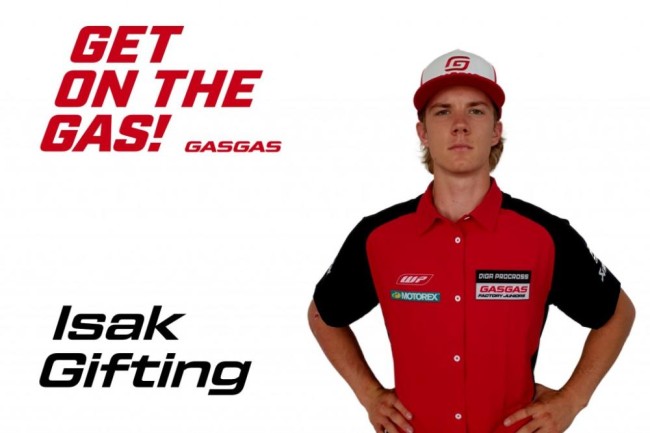 After the two DIGA-Procross GASGAS Factory Juniors athletes, Jeremy Sydow and Simon Längenfelder, were injured in Faenza, the team around Justin Amian immediately looked for an adequate replacement and, in cooperation with the KTM Group, found Michael Sandner & Isak Gifting.

In the next days several tests will take place to adjust the GASGAS MC 250F to the two athletes and to be prepared for the next triple header event in Mantova.

Justin Amian: I am happy to welcome Michael Sandner to our team, an athlete who has already gained experience in the MX2 World Championship and who will represent us until the end of the season. With Isak Gifting we have a promising athlete next to Michael Sandner, who has shown his potential in the EMX250 this year and will get his chance in the MX2 World Championship. Our goal is to take a step forward every weekend and collect as many points as possible.

Michael Sandner: I am happy to get the chance to compete for DIGA-Procross at GASGAS in the MX2 World Championship. Actually my plan was to ride the Austrian Championship and a few World Championship races afterwards, but this plan changed suddenly with one phone call. I would like to thank my sponsors and Team Sarholz, who did not put any obstacles in my way to take this chance. Now it’s time to concentrate fully on preparing for the next MXGP race in Mantova.

Isak Gifting: I am happy to make my debut in the MX2 World Championship in Mantova. The races in the EMX250 have gone very well for me this season so far, but despite the third place in the championship, I want to take the chance to prove myself in the MX2 world championship. Thanks to all my sponsors for supporting me in this step and making this possible.