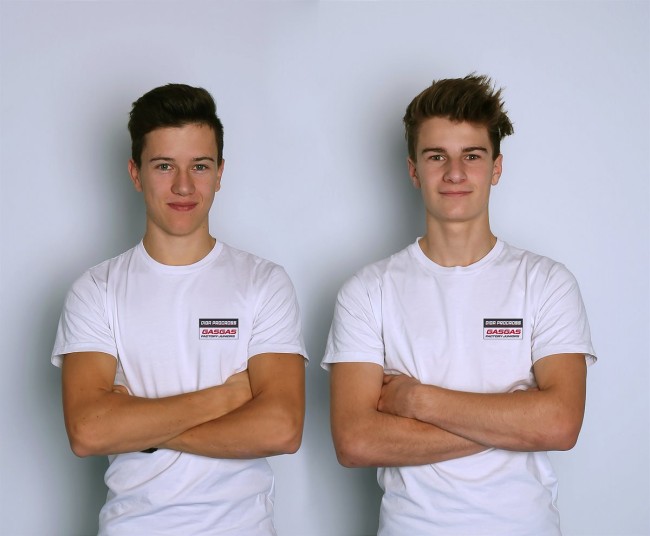 GasGas’ presence in the FIM Motocross World Championship has been expanded to the MX2 class with the Diga Procross GasGas Factory Juniors squad set to field promising talents Simon Längenfelder & Jeremy Sydow in 2020.

The German crew will make the step to the MX2 category with 250cc machinery and with two of Germany’s brightest prospects contemplating their first campaign at world championship level.

19 year old Sydow finished 6th in the 2019 EMX250 European Championship and grabbed his first podium finish at the Grand Prix of Latvia (also the scene of his first top three moto result). The youngster suffered an injury at the beginning of the season but immediately grabbed attention with his race-leading speed at Kegums. He made his MX2 debut at the Grand Prix of Italy last summer and impressed with a top ten classification in the second sprint at Imola.

15 year old Längenfelder was 3rd in EMX125 with seven top-three appearances from the fourteen motos, including overall podium results in Italy, Germany and Sweden and victory in Belgium. He also shone in selection for Team Germany at the recent Motocross of Nations in Holland and was 4th in the FIM Junior World Championship. Längenfelder will push straight into MX2 for 2020.

Jeremy Sydow: “I’m really happy and thankful to have the opportunity to ride as a GasGas supported rider next season. It will be my second year with the team and I appreciate the trust the guys have in me and I will give everything to be as fast as possible! I’m looking forward to the season already.”

Simon Längenfelder: “It’s great to be riding a GasGas bike next year, it’s something different but we know we will have the right equipment for our first MX2 season. I have a lot to learn but I’m looking forward to the challenge and I’m really looking forward to some good winter preparation with the team.”

Justin Amian, Team Principal: “It was always a dream that DIGA-Procross would receive support from a factory one day but I never expected to get the chance this fast. I’m really happy and thankful to start a new era and represent GasGas in the MXGP Paddock as the official MX2 Team. We have a good structure and I feel really optimistic with my crew. All preparations for the upcoming season are running well and with good intensity and we will continue to grow our set-up step-by-step. Our two riders, Simon and Jeremy, are young guns. We see a lot of potential in both athletes and our goal is to improve through the year.”

Robert Jonas, VP Offroad: “We could see the work that DIGA-Procross were making in 2019 and that convinced us that they would be very suitable candidates to begin our GasGas project in MX2. The priority is to help develop two excellent young riders. Both have shown their potential this year with results in their respective European Championship series’ and we believe they could make significant steps forward in 2020. Overall this is the beginning of what we hope will be a promising partnership both for the team and the GasGas name.”