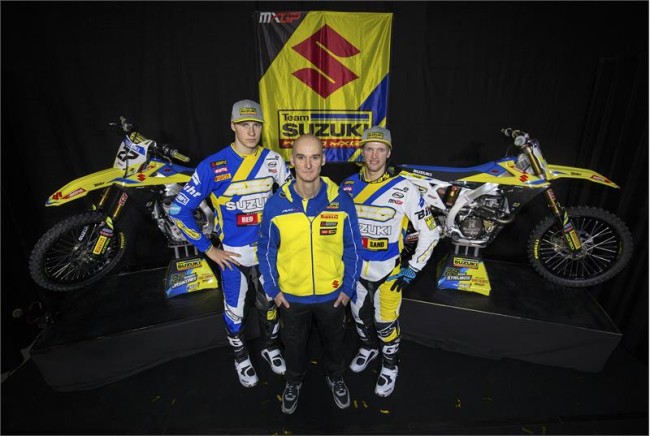 Suzuki World MXGP Team brimming with potential and with the brand-new 2018 RM-Z450WS.

With the gate drop for the opening round of the 2017 FIM Motocross World Championship less than a month away, invited media from around the world headed to the Suzuki World MXGP Team headquarters in Lommel, Belgium today to check-out the brand new, never-seen-before 2018 RM-Z450WS which will be ridden by Kevin Strijbos and Arminas Jasikonis in the World MXGP class this year.

In an event that was broadcast live around the world, no expense was spared with the presentation of the RM-Z450WS machine that had been successfully kept under wraps until the grand unveiling at 2pm CET today.

Also being presented was the rest of the Suzuki World team which included riders from the 85cc, EMX250 and the MX2 class, in a squad that is brimming with potential.

Led by General Manager and 10 times World Champion Stefan Everts, the team is looking to bring success to the Suzuki brand in what is a concerted effort from Europe and Japan to support their assault on the World Motocross Championships.

He had this to say about the new bike and upcoming campaign: “I am very excited of course, it’s my second year with Suzuki and I am so happy and honoured to be able to present this new RM-Z450WS. It is a great bike, it looks fantastic and it is new motivation for everybody involved to take the brand back to the top step of motocross. Of course there is still a lot of work to do in the future for myself and the team but having this backup from Japan and this new bike is something great for everyone.”

Also in attendance was Jan Breckwald, General Manager Sales and Marketing Suzuki EU who commented: “I can’t wait for the season to start, so best wishes to Stefan, all the riders, all the mechanics and all the people who are involved in this team; lets rock and roll!”

Leading the team will be the experienced Kevin Strijbos who recently celebrated becoming a father for the first time, and he will be looking to back-up his Lommel victory from last year on this new RM-Z450WS.

I’m excited with the bike and looking forward to it, I had a good off-season staying in shape and although I had a bit of illness recently, I still feel good. Having a kid has certainly made things strange because I still want to ride, but it’s not the most important thing in the world to me now. Even if I have bad day, when I see my kid smile, it makes me feel better and I hope being relaxed will help take some pressure off and allow me to be more comfortable on the new bike.”

For Lithuanian Arminas Jasikonis, this will be his first full year under a factory awning after what ended up being a successful audition filling-in for Ben Townley in 2016 and he sees it as a great honour to be a part of this ground-breaking project: “I am really excited for this new year. The new bike is something special and a lot of people are really going to be excited to see it. This is my first full year as a factory rider, coming from a small country and a small team, so I am really pumped and excited and I think we are going to do well. There is still work to do but I have improved a lot already thanks to Stefan and his program. And I’m excited.”

In the MX2 class, a lot is expected from the trio of Jeremy Seewer, Bas Vaessen and Hunter Lawrence as the division is wide open, with many riders still looking to win their first race. Leading the way is 2016 MX2 runner-up Seewer, who will be looking to go one-step higher this year.

The young Swiss title contender is feeling confident though: “I had a really good winter, improving the bike where we needed to improve it and myself I feel really good, especially my fitness which is on a new level. There is only one spot left to improve after 2016, which is to win the title but I don’t think it will be that easy. There are a lot of fast guys out there so it will be tough, I will try to be consistent, take it race-by-race but I want to win GPs and be up front at the end of the championship.”

Joining him is Dutch rider Bas Vaessen who finished third in the EMX250 class last year and looks like continuing the nation’s history of producing top quality riders.

Obviously this is every young boy’s dream so understandably Vaessen was very excited about getting started: “I’m pumped about this new season. I’ve rode my entire life for this moment, to be a full-time Grand Prix rider and I’m excited. It’s going to be a long season, a tough season but we’ve worked hard for it, so it should be good.”

Also stepping-up from the EMX250 class is Australian Hunter Lawrence, who had an interesting first year in Europe, winning a couple of races before succumbing to a knee injury midway through the year. He’s hoping he can bounce back to his pre-injury form, on the RM-Z250.

The likeable Aussie had this to say on his switch to the Suzuki World MXGP team: “This year I’m trying not to put results into my head, we all want to win, that’s for sure, but I need to go in and do my best each race and the results will be what they are. I’m just trying to focus on making good progress throughout the year, learning racecraft, and getting as much experience under my belt as possible. I’m really looking forward to it though.”

A step below on the ladder is newly signed EMX250 rider Zachary Pichon whose father Mickaël Pichon raced for the GRP Suzuki team in the past, successfully winning two world titles for them. Pichon still has a long way to go to emulate his father but his journey begins this year, on what is his first season on four-stroke machinery.

“I’m very happy and excited to start the new season. Also with the bike, it is very good and I have a good feeling when I’m riding it. And to be a part of the factory team is great step for me. I feel comfortable moving up to the four-stroke as I think it suits my style really well,” commented the young French rider.

While the current stars are looking good, the Suzuki World team is also excited by the future with Liam Everts and Jett Lawrence joining the squad in the 85cc division. With Liam being son of General Manager Stefan, and Jett being the younger brother of Hunter, there is a real family environment with the team which should stand Suzuki in good stead for many years to come.

Being son of the Team Manager can come with a lot of pressure but Liam seems to be coping just fine. “I’m just going out there to do my best and try to improve race by race and not to expect to be so high, I hope I can stay injury-free and learn as much as I can.”

His team-mate had this to say about the move under the Suzuki awning. “I’m excited for this year because I get run under the guidance of a 10-time World Champion so I’m just going to do as much as I can and be as good as him.”

After a rebuilding year in 2016, the Suzuki World MXGP team will look to come out firing on all cylinders for this upcoming campaign, with podiums and race wins the least that is expected from this highly talented group of riders.

Check out the Suzuki photos below: