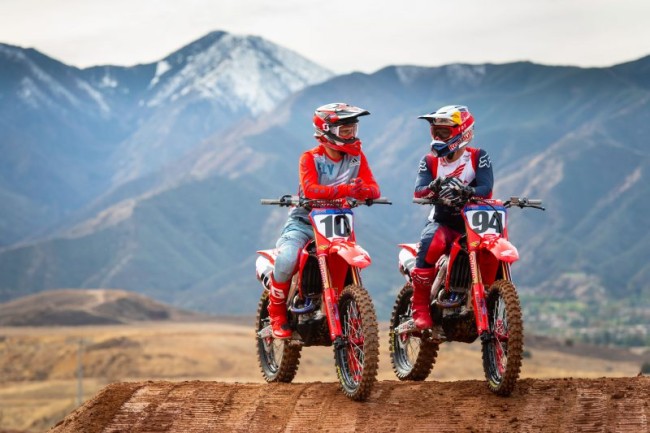 CORONA, Calif. (December 3, 2019) — During a special media event held today at the official Honda test track, American Honda presented its teams for the 2020 AMA Supercross and AMA Arenacross seasons. Thirteen riders from four different teams did interviews with journalists, rode for the cameras and socialized with sponsors.

Headlining the event was Team Honda HRC, which will field Ken Roczen and Justin Brayton aboard the factory CRF450R in the 450SX division. Roczen, who is coming off a runner-up overall finish in the 2019 AMA Pro Motocross series, is preparing for his fourth year with the squad. Brayton, who just sewed up his fourth Australian Supercross Championship, returns to the team he last rode for in 2012. Brayton continues his practice of focusing on stadium racing, and at the conclusion of the AMA Supercross series, his seat will be filled by 450 rookie Chase Sexton.

Also on hand was the Smartop/MotoConcepts/Bullfrog Spas Honda team, which is based in Victorville, California, and will campaign the 450SX division on the CRF450R with Malcolm Stewart (recently third at the Monster Energy Cup and second at the Paris Supercross), Vince Friese (a veteran with the squad, known for his strong starts) and Justin Hill (new to the team for 2020).

In addition to its supercross efforts, Honda presented Phoenix Racing Honda’s AMA Arenacross team, for which defending champion Jace Owen will be joined by Kyle Peters, who begins his first arenacross season. Based in Salisbury, North Carolina, the team also plans to campaign the AMA Supercross 250SX East region rounds.

“This is always a busy, exciting time of the year with the supercross and arenacross openers around the corner, so it’s fun to take a short break and give our media friends the chance to hang our with our teams,” said Brandon Wilson, Manager of Advertising & Motorcycle Sports at American Honda. “We have four strong teams with solid lineups for 2020, and we take pride in those relationships. There’s every reason to be optimistic for a great year of stadium and arena racing for Red Riders.”

The AMA Supercross season kicks off in Anaheim, California, on January 4, one day after AMA Arenacross begins in Loveland, Colorado.