Gajser, Vlaanderen and Bogers on Lommel 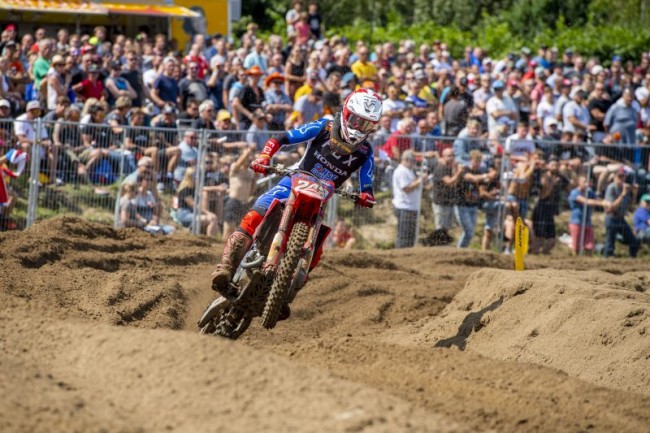 Team HRC’s Tim Gajser became the first Honda rider to win the MXGP class at the toughest GP of the year in the deep sand of Lommel, Belgium. Known throughout the world as a brutal test of both man and machine, Gajser put his Honda CRF450RW exactly where it needed to be in both races, starting out front before securing two comfortable second place finishes which was good enough for his ninth MXGP overall of the season.

With the championship title becoming a bigger and bigger focus, Gajser entered this race not needing to push for the win, but rather to try and minimise any mistakes and survive the treacherous sand on the Lommel circuit. However, helped by two great starts, he was able to get out front and push early on in the race to try and break away from the pack and while he wasn’t able to win, he was comfortably ahead of third in both races. As others struggled to stay upright, he rode two extremely smooth races to take a deserved victory and extend his points lead at the top of the MXGP championship to 187 with just 200 points remaining. This means that he heads to Imola with the championship crown well within reach and after taking victory in these sandy conditions, no one can argue that he has been the best 450cc rider in the 2019 world motocross championship.

Team mate Brian Bogers wasn’t quite able to achieve his goal of two top 10 finishes as a crash at a crucial time robbed him of that opportunity in first moto. After a tough start to the race, he came through the field and was approaching 10th place when a crash dropped him back outside the top 20. He then fought his way through the field again but could only manage to get up to 15th in the tough conditions. Then another tough opening lap in race two saw him in 12th place before progressing up to ninth over the next few laps. Despite a small tip-over late in the race, he maintained that position which was good enough for 13th overall, just five points off the top 10.

Gajser and Bogers now have a weekend away from the series in order to prepare for round 15 at the famous racing circuit of Imola, Italy. Introduced to the world championships last year, it provided another different challenge for the riders and with its close proximity to Slovenia, there is expected to be a lot of Gajser fans making the trip in order to cheer their hero on to a third world championship when the gate drops on August 24-25.

Tim Gajser 243
It was a great weekend, finishing two-two for first overall in Lommel. My riding was good, especially because in the past I’ve struggled here but we’ve worked hard this year with the team and it really paid off. We’ve prepared a lot better for these tough conditions and it was certainly helped by two good starts, just like we have done so often this year. I wasn’t able to win a moto but I rode smoothly and smart and I minimised any mistakes. I’m just so happy to win here in Lommel, because it is a special GP and a good test and just shows how much I’ve progressed as a rider.

Brian Bogers 189
I felt good on the track as it was really deep sand and I like these conditions. My riding also went well, I just struggled out of the gate and that put me behind. Unfortunately I crashed in the first moto when I’d made my way all the way back to 12th and that pushed me outside the top 20 again. I worked my back to 15th, which isn’t bad but I really wanted to get a good start and battle with the top guys as I feel on this track it is possible. Second moto was very similar, starting around 19th but I made my way up to ninth and finished there. Fifteen and nine isn’t bad but I wanted more, so I’m going to put this behind me and concentrate on Imola now.

Calvin Vlaanderen 10
It was a pretty good day today, although I was definitely disappointed after my first moto when I finished seventh. I had a small crash which dropped me down a few spots and that was frustrating. In the second moto I actually had some fun on the track, even with the tough conditions. My plan is to always have fun and the first moto I really didn’t enjoy it, but in race two things went a lot better. I flowed around the track with a good rhythm and even though I finished second, I didn’t expect to be on the podium. Only when they wrote on my pitboard near the end did I realise and obviously I’m really happy to finish second and have my best overall of the season.

Marcus Pereira de Freitas
HRC General Manager – MXGP
We know in previous years that Tim hasn’t enjoyed riding here, so for him to come out and get the overall victory is just another really impressive achievement in a season filled with impressive achievements. He has worked really hard on his sand riding all winter and it showed because he really looked comfortable out there. We certainly weren’t expecting this because of the championship situation where he doesn’t need to push but we are delighted and now we can head to Imola in a really, really strong position and hopefully we’ll have a big celebration there.
Brian had to pass a lot of riders in his races, so he made life difficult for himself but he never gave up and he kept trying until the end. He probably deserved better than 13th overall, especially with the ninth in race two but we will keep on working for these final three rounds.

It was a crazy second moto for Calvin because after race one we thought a podium would be very difficult to achieve. However, he did everything he could to put himself in that position and he was rewarded for his efforts. Just like in the Czech Republic last weekend, he showed he had the speed but this time out he was able to show he could put in the results too and that was really impressive on this deep sand track. Since his injury he has comeback and ridden really well and it is just great to see his determination out there.