Gajser under pressure heading into Latvia? 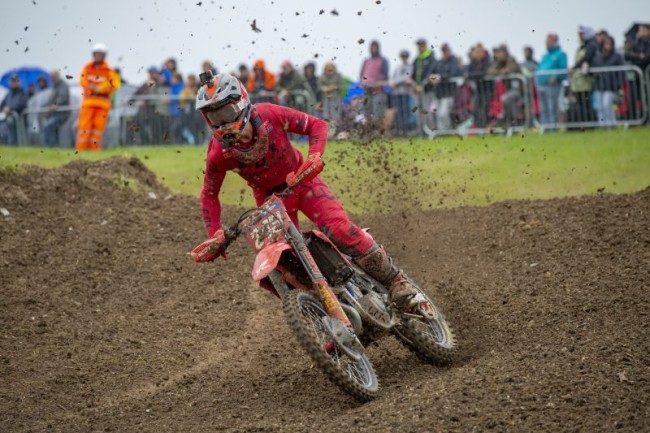 Tim Gajser still has the MXGP world championship lead but after five crashes in three motos, the defending world champion is under more pressure than he has been all season!

Despite some very impressive speed at Lommel, including that burst at the end of race two to catch the leading trio of Prado, Jonass and Febvre, Gajser’s championship lead is now down to five points with all the big contenders right on his heels. Romain Febvre, fresh off his first win of the season is up to second, Cairoli is now just nine points behind in third and Jorge Prado is right in the mix just 14 back in fourth – and still gaining his fitness back after Covid! In addition, after his captivating ride at Lommel, Jeffrey Herlings is only 42 back after seemingly being out of title contention after his broken shoulder blade.

There is no doubt Gajser has opened the door to his competitors lately with Herlings admitting that it was Gajser’s crash at Loket that convinced him he had to try and ride in Lommel! An interesting stat to underline the momentum shift is that Gajser hasn’t won a moto since the second race at Mattlery Basin round two! At that point he had won three of the first four motos and looked in control of the series, but heading into round seven in Latvia this weekend, the HRC Honda star hasn’t won in eight motos straight, and crashed in the last three, as his points lead dwindles after each weekend. Things have changed dramatically.

Of course, Gajser has seen this all before, he is very mentally strong and you don’t win four world title without being able to haul yourself out of a tough spot. Importantly, it isn’t a lack of speed that is the concern, more mistakes and perhaps, at times, not getting the starts when he really needs them. As we have seen in the past, Gajser can go fast at Latvia (and also crash big) but it is a track the sand men will want to take advantage of even if it has a hard base and isn’t exactly Lommel, Gajser is being attacked from multiple angles right now.

Last weekend we wondered if Gajser would play it safe, he didn’t and crashed in qualifying and both motos. Now, he can’t really afford to play it safe with the points so close and his rivals racing with revitalized energy, invigorated in knowledge that their big red rival looks to be on the ropes a bit. Everyone will come out swinging in Latvia to put their stamp on the series before the three week break but Gajser really needs to find his knockout race-winning power and stop hitting the deck to prevent the points lead eroding away at Kegums.

Podcasts! See our latest podcasts below; a review of the MXGP at Lommel and an interview with Andrew Short on his successful US career. You an also get them on Spotify and iTunes.