Gajser: The track was really tough 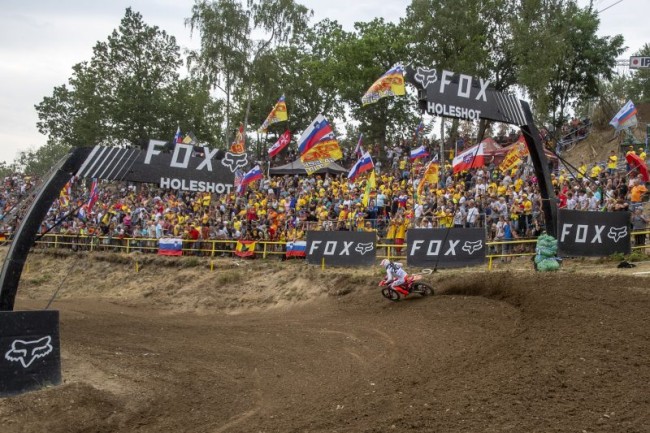 Tim Gajser 243
The track was really tough, it was hard and slick so I didn’t feel so comfortable on the track, but I’m quite happy with how the motos turned out. I took two good starts and I was riding smart and I didn’t want to push too much because it was easy to make a mistake. Overall it was a good weekend and I’m happy I could give all the Slovenian fans something to cheer about. They support me so much on the track and I could really hear them around the start straight bend each lap. So many of them made the trip and I am just really thankful for every one of them and it is just an awesome feeling to be out there and celebrating with them.

Brian Bogers 189
I’m quite happy with the results today. In the first moto I got a good start and was in fifth and I felt good there. I showed some good speed at the beginning of the race but then I got arm pump and had to slow down. Still, I finished ninth and that’s good. Unfortunately the start didn’t work in the second race and I had to start from around 20th. I fought back to 12th though and I’m happy with how I rode. It was much better than Indonesia and it was important to bounce back. I’m certainly looking forward to next weekend on a sand track that I enjoy riding on.

Calvin Vlaanderen 10
It wasn’t a great pair of races to be honest. I’m a bit disappointed with the results, but I’m happy with my riding. I didn’t feel fast, but I proved in a lot of sessions that I was one of the fastest out there, especially in the first race. I had a good start and was riding behind Tom (Vialle) and for 20 minutes I was getting roosted by him and I was trying everything to pass him but the track was so one lined and I couldn’t find a way. In the end I tried and he cut me off at the last second and we came together and we both went down. This was unfortunate but I was able to pick the bike up and finish ninth. Second race I had a pretty good start again, I moved from fourth to third and I then I had a small tipover. I didn’t feel great in that second moto but overall I’m happy with my speed and I’m going to keep working in order to make the most of these five remaining GPs.

Marcus Pereira de Freitas
HRC General Manager – MXGP
It was a really professional performance from Tim this weekend, despite being under a lot of pressure with all his fans that came to visit. The track was difficult to ride, and he made sure that he finished in second place, rather than take risks in order to go for the win. Of course we would have loved to have seen him on top of the podium for the eighth race in a row, but the championship is the main focus and he did what he needed to do, and that was extend his lead at the top of the championship even further.
Brian also rode well in both races and can consider himself unlucky not to have finished inside the top 10 overall. It was great to see him and Tim up near the front in the early stages of race one and we hope that he can manage to do the same again in Lommel, on a track that should really suit him.

It was good to see Calvin at the top of the leaderboards in a lot of the sessions this weekend, but obviously it’s a little disappointing that he wasn’t able to translate that into a podium points haul. It was a difficult track to race on and he ate a lot of roost in both motos because there weren’t a lot of lines out there, but he definitely deserved better with the speed he was showing. Still, we move onto the next round in Lommel and I’m sure Calvin will already be focusing on doing well there.