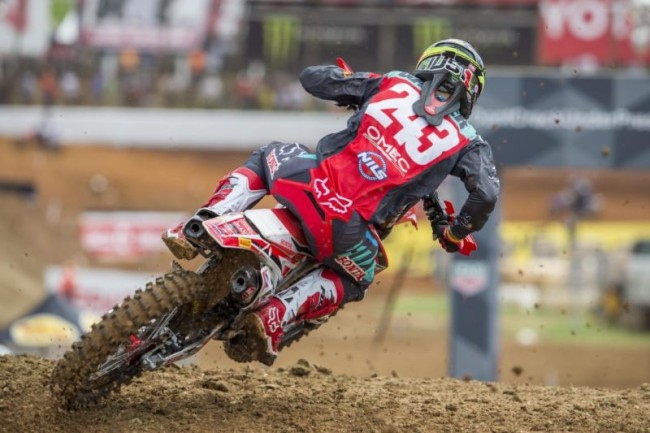 Team Honda will consist of Evgeny Bobryshev, Gautier Paulin and Tim Gajser for this weekend’s Supermotocross Riders’ and Manufacturers’ Cup in Germany.

Held in the Veltins Arena in Gelsenkirchen, Northwest Germany, the all-new SMX event is set to be an indoor spectacular mixing the best riders from Europe and the US, and the best of motocross and supercross.
The format involves three riders per team, and three fast-paced races on Saturday evening, the starting order of which is decided by a superpole shootout.

Evgeny Bobryshev will again ride the all-new 2017 CRF450RW, whilst Gautier Paulin will continue to use the 2016 CRF450RW with which he helped Team France win their third consecutive Motocross of Nations two weeks ago.
The action gets underway this Saturday, 8 October, as the gate falls on the first race at 2045hrs local time.

Evgeny Bobryshev – “I think it’s interesting for everyone to have a new race format in Europe like this. It’s a good thing it’s all in one day, but it also means we have to get used to the track and to the format very quickly which will make it more tricky. The track is very short and we don’t have so much time on it so we’ll need to learn it fast. But I’m excited to race there this weekend. Since the Nations I’ve spent the time training on some small supercross-style tracks in Italy, and it’s a style I like. It took me a little bit of time to relearn some of the techniques, but even after a few days of practicing I was feeling much stronger, so I know I can run a supercross track well.”

Gautier Paulin – “Since the Nations I’ve bene training on supercross tracks and I’ve been really loving it. People who follow me know that I love to ride supercross, so I’m really happy to have been able to put the laps in and working hard for this weekend. We don’t know what to expect because it’s a new event, but we go with an open mind and with excitement to see how it is. For me it’s a good way to end the season – winning the Nations with Team France last time out, and now being able to ride this supermotocross event, so I want to give my best like always for the fans and for Honda and for the team.”

Tim Gajser – “I’m really looking forward to being back to racing this Saturday at SMX, especially because I’ll be on the new Honda CRF. I think SMX will be nice – it’s something new for us in Europe. We never did events like that over here so I’m really excited about it and looking forward to racing alongside all the big names from MXGP and Supercross. It’s nice to see that events like this will happen in Europe. We are used to seeing shows like this happen in the USA, so it’s going to be really good for us to have it in our home here in Europe. The track looks nice too – a good mix of Supercross and motocross.”

Roger Harvey – “It’s a new initiative for us to get our heads around because no-one really knows what to expect from this event. There’s a team element to manage from the manufacturers’ side, as well as the riders’ cup element so there’s two aspects to be concerned with, but we’ve got a strong team with Tim, Bobby and Gautier so we go with intrigue as to how this new event will unfold.”