Gajser, Osborne and Herlings on their qualifying race win! 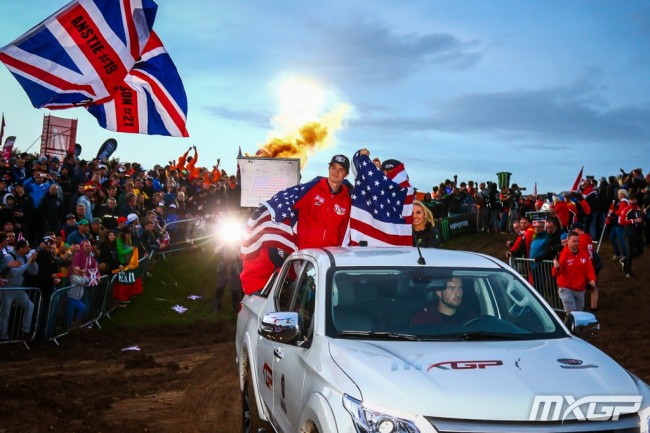 Gajser: Yeah the track is really good, I’m really enjoying it. I started second and made a quick pass to take the lead. I made a gap and could control the race. I was enjoying it so really happy that we will be in the A final tomorrow and I think we will enjoy it even more tomorrow.

It’s tough for us we got the A final after five years so it’s great to be in the big show and I will give my best and my teammates will give their best.

Osborne: It was tough, we had 37th gate pick and I didn’t make the very best start with that gate pick so it was pretty bad. I think I was 25th or 23th when we came out of the first corner but I made some passes on the first lap. Even when I was in second I didn’t think it was possible to catch him, he made some mistakes and in the end I won.

For me the main goal is to put as many bikes between me and the next MX2 guy as possible, for me I just need to score as low as possible. I think it’s feasible for us to be on the podium, a win is not out of the question, I think we can make some adjustments for tomorrow and get a lot better and no one is panicking so it’s all good.

Herlings: We did a pretty good job it’s a shame we (team) didn’t win qualifying but it’s all about tomorrow. Brian did a good job, I think Glenn was a bit off today but hopefully he can regroup for tomorrow. Brian did a really good job, he took the maximum out of himself, the guy is good but he nothing like Zach and we just have to accept that he is a good rider but probably won’t win the MX2 class.

Hopefully I can do the same thing tomorrow and hopefully my teammates will be up front as well. There are a lot of good guys in all three of the classes so it’s going to be tough but I am happy about my riding today and looking forward until tomorrow. There are seven or eight potential winners so we need luck in our side but so do the competition.