Gajser on his win in Argentina! 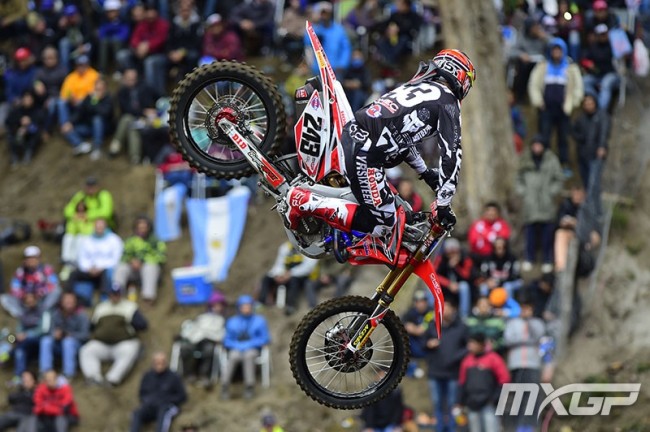 Tim Gajser took a stunning victory at the MXGP of Argentina today, making it his second victory from four races in his debut season, and meaning that he has not finished off the podium with the CRF450RW in 2016.

Starting from pole, Tim Gajser emerged from the first corner of race one in fourth but then, uncharacteristically for the MX2 World Champion, slid to sixth on the opening lap. Regrouping, he mounted a comeback to pass Glenn Coldenhoff and Clement Desalle and catch the battle for second between Team HRC’s Evgeny Bobryshev and Antonio Cairoli. With seven minutes to go the Slovenian had passed both and was in second, but a last push from Cairoli with three laps to go meant that he took the flag in third.

Race two was a much more dominant affair, with the Slovenian claiming the holeshot, setting the fastest lap and never looking back as he ran away from the pack to victory. Victory today means that just three points separate Gajser from regaining the red plate as the championship leader.

In MX2, Jorge Zaragoza had a tentative warm-up after injuring his knee in the qualifying race yesterday but, after painkillers and ice treatment, was in better shape for race one. Starting from 20th, he made a good jump from the gate and was into the top six entering turn until he got closed out on the exit. Emerging in tenth, the Spaniard dropped to 12th before climbing back inside the top ten, taking the flag in ninth.

In race two Zaragoza made a good start from the outside but then got pushed wide upon exit and lost position. Reaching 14th midway on the opening lap, he got caught up in the crash of another rider which demoted him to 21st. He regrouped and pushed to the flag, making passes right up until the final lap to take the flag in 12th.

The next race takes place just next weekend as the second of the South American back-to-back pairing takes the paddock to Mexico.

“I’m really happy with the whole weekend – yesterday I won my first qualification race in MXGP, and then today was good, especially the second race. I was really pumped about the win in the qualification race, and even though I wasn’t so happy with the first race, the second race was amazing. In race one I didn’t have the best start, but then I passed many riders and finished third even though I made a little mistake. Then in the second heat I took the holeshot and lead all the race, controlling it from the front which was just incredible and I’m just so happy for the whole team. It’s a great feeling!”

“In the end this weekend was quite ok because yesterday I had a big crash and had a lot of pain in my knee, and this morning I wasn’t expecting to be in the top ten like in race one. In the second race I had a problem with a guy that crashed in front of me, but anyway I think my riding was ok because I could come back to twelve making passes right up to the last lap. I had some pain in my knee still the whole time, but it was ok for me to manage that and I’m pretty pleased with this weekend overall.”

“That was a performance typical of Tim today! His whole weekend has been very good, from his qualifying win yesterday and then the victory today, so we are very pleased. He fought hard in race one to make positions, and then controlled the second race very well. Four podiums, including two wins, from four races in his MXGP debut season is really quite incredible. For Jorge, we thought the injury to the knee yesterday would be ok today, and although it still caused him some pain he could ride through it to finish inside the top ten in race one. He would have done the same in race two as well but he was involved in another rider’s crash, but still we can see him moving forward with each race.”